This experiment has been revised because confounds have been presented by other findings and creatures which were trapped alongside the mites.  See the confound page for more information on this.

Click here to jump to image section for trap plant. 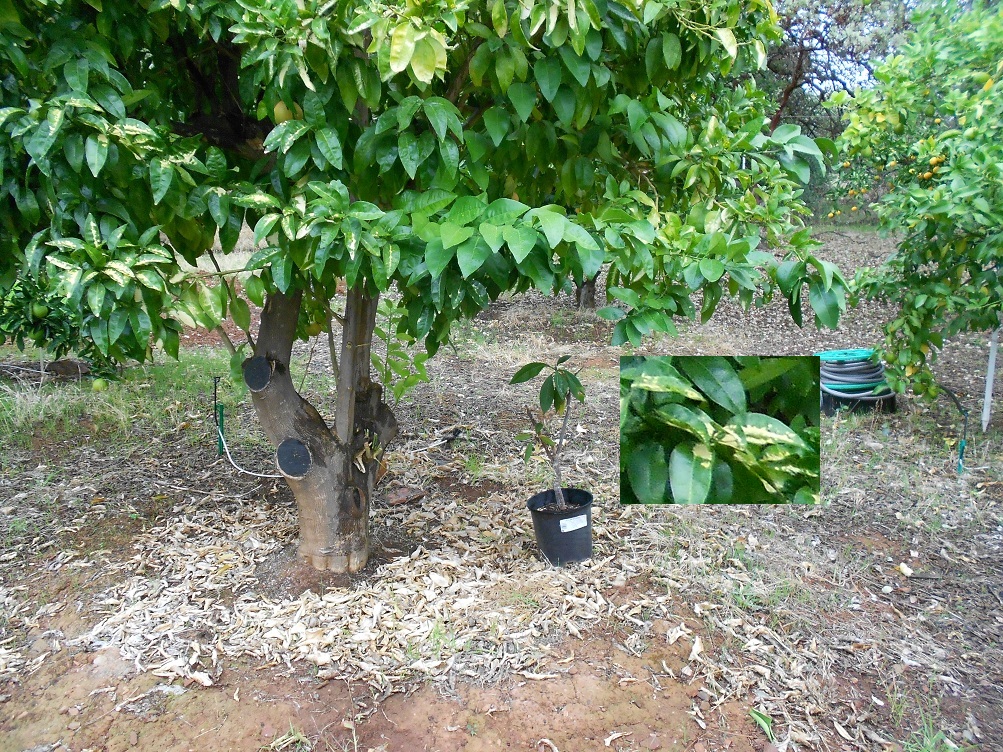 Grapefruit tree and trap plant (Plumeria rubra), with magnified inset showing discoloration which hints there are mites.  Deformities, also visible on the tree, are another indicator.  Note the various branches which have been removed in an attempt to collar the tree, which so far hasn't really helped.  In addition, grasses have been kept to a minimum around the base of this tree and others in the grove but some does creep back into the grove and requires removal. See this page for images of damage and more information for the grapefruit.

If you have citrus in your yard and have been curious about deformation and/or nutrient deficiencies which show up on newer growth, then this page may be of some help to you.  For years (dating back to 1998) I have been attempting to diagnose what exactly has been going on with the grapefruit tree.  Year after year it would produce a crop of fruit which had necrotic spots all over the rinds.  This I also noted too (images recorded but not posted yet) once upon lemons (tree adjacent to the grapefruit).  In addition to the necrotic spots, there would be funky, wavy, curled leaves, with white and yellow splotches, something which I later learned could be caused by the sixspotted spider mite and wasn't necessarily related to lack of nutrients in the soil.  Since inspection of damaged leaves provided little else but images of debris under the microscope, I knew that there had to be another way to sample the pests from the tree.  You may notice that I still leave the title with "web-spinning" as these spider mites do indeed produce silk webs but singular threads most times when populations are low, spanning gaps between plant parts to build bridges.  This aspect of them has me absolutely curious because they are so tiny (~500 microns for very large females [estimate using hair follicle adjacent to egg/mite for measurement was a bit off - see this page for actual measurements] or a bit less, especially for males, when adult - noted in other publications 300 microns), and their ability to produce silk webbing (of such amounts and masses compared to their body sizes) which bridges spaces reaching an inch in length just astounds me.  Although I have witnessed them dangling from silk before (and captured on video), I haven't had the opportunity to capture them on video doing that, and then swinging over to an attachment point to make the bridge.  Also indicated in some of my earlier years' mite research on the site is mention of and there are images showing that they use silk as well to attach their eggs to leaf surfaces, as well images of them with abundant webbing too.  As with other mite species, the higher the populations, the more webbing.

Early in the summer of 2011 I placed a plumeria (small red shell offspring, rooted cutting) underneath the canopy of the grapefruit tree (shown in image above), which a few weeks prior had been treated with homemade insecticidal soap.  The plumeria (which had been chemically treated while still in the greenhouse, late spring to rid it and others of thrips) received small amounts of water delivered by over-spray from a micro sprayer.  In addition no fertilizer nor other amendments were applied prior to placement, thereby placing the plant into a "stressed" condition.  It was removed from underneath the tree and then placed into the mite tent (see below for images) in early November, 2011.

Although imaged lower on the page, the red (fall/winter coloration, while outdoors) adult mite did evade my attempt to place into a slide for microscopy.  As such, and understood from previous research, the ability to correctly identify these mites depends upon the availability of large numbers, which makes it much easier to grab specimens for microscopy.

Taking an example learned from a genetics course, if there isn't enough sample to correctly identify something, then it needs to be replicated, which for geneticists one of their tools is polymerase chain reaction (PCR), which works rather quickly, and provides for enough genetic material, after replication, for effective electrophorisis to occur so that genetic comparisons can be made.  In the case of the sixspotted spider mites, it takes time (and isolation helps - predators can wreck havioc upon studies) for this replication in numbers to occur.  Later, in April of 2012, images will be obtained of various stages of mite development via microscopy.  Until that time the mite tent will remained sealed, except in the case water need be applied to the plant.  However, until then various images taken from outside the tent will be posted of how the plant tissues respond to the mites, this time within a more controlled environment than was used in years prior.  In addition to the plant contained in the sealed (super glue works well to join sections together, is quick for seams and requires no stitching for the clear vinyl) environment of the tent, images from other plumerias brought indoors during the winter which also suffered are included too. 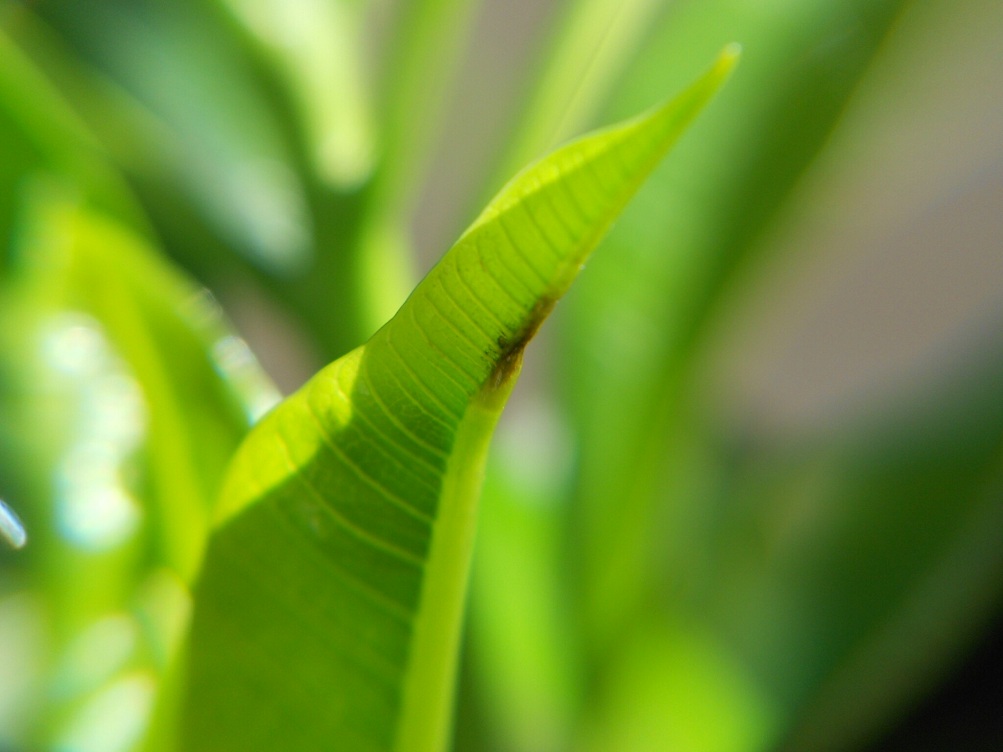 Necrotic tissue upon an e2 clone Plumeria x stenopetala.  The above image (taken just prior to chemical treatment) confirms what I thought I was seeing (but with an inchworm wandering around and chewing upon leaf tissues initially, I had to wait until it was not), and even though I had an idea they were there, it wasn't until the 25th that there was more direct evidence that the sixspotted spider mite made it indoors along with the P. x stenopetala clones, which also carried the inchworm larva.  Since these had to be treated with an effective treatment, the moth (adult inchworm), which had been residing within the tented confines along with these clones, is now in the terrarium.  Indirect evidence that they were there prior to seeing the necrotic tissue included deformed tissues, as seen before upon P. rubra and upon tender versions of the e2 clones.  It does appear from initial observations that P. x stenopetala are much more sensitive to these particular mites than are P. rubra.  Better trap plants? 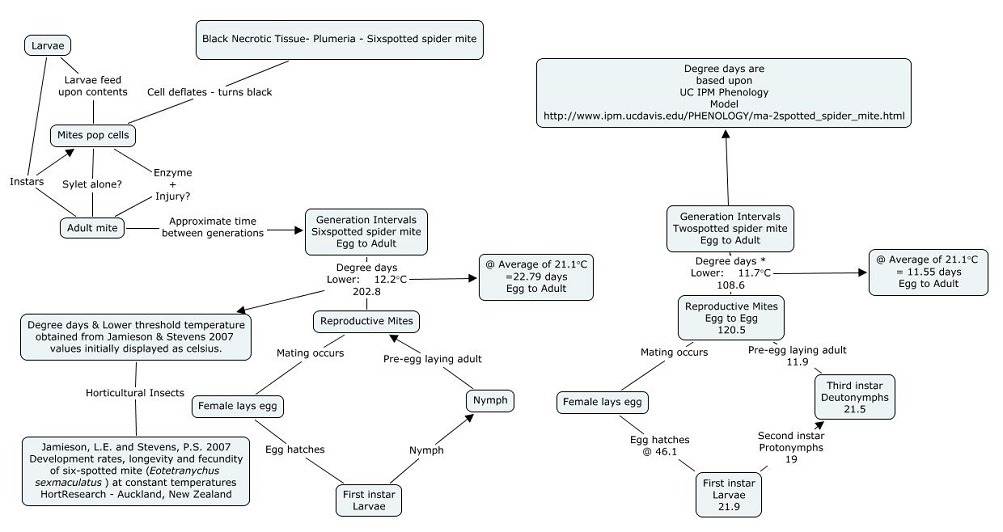 The above diagram helps demonstrate some questions still outstanding.  Included for comparison is a diagram based upon the twospotted spider mite model shown on the UC IPM website.  The estimation of days between generations of mites is based upon an average temperature for the house where both the  mite tent with the P. rubra trap plant and blooming P. x stenopetala clones are maintained.  Any question marks contained in the diagram are open questions and include questions of biochemistry (do they use an enzyme to help break down/predigest their food as some arachnids do?) which are a bit beyond my means, at least for now.

Start of Images from Trap Plant 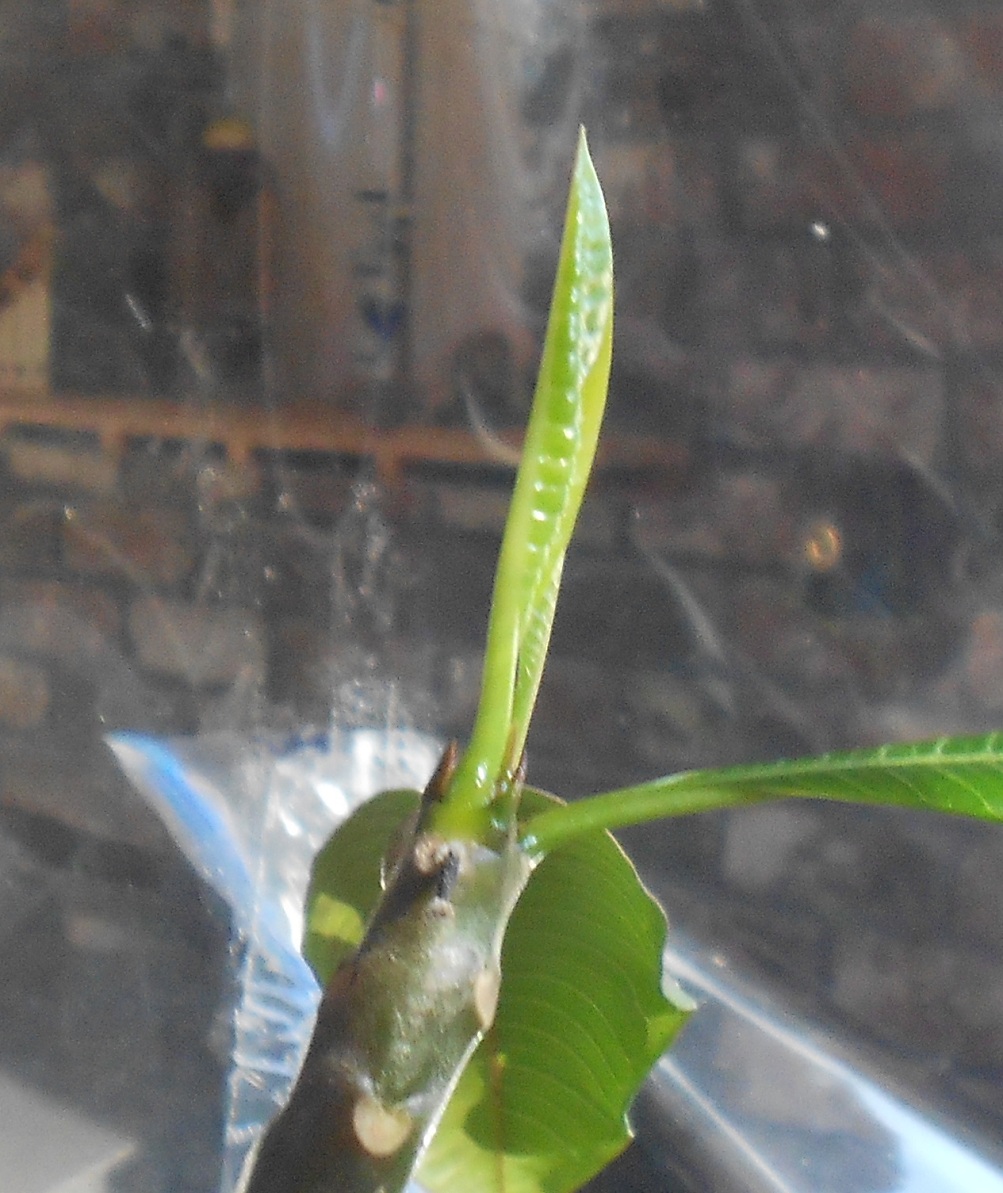 The tip didn't die, and indeed pushed, but that new growth is already in trouble, with it struggling to elongate.  This is mimicing, somewhat, that being observed on the Australian plumeria grown from seed in the greenhouse which was infested with these mites.  See this page for that.  The humidity level of the tent on the image date was 94%.  [see oroweather page to see climate data in relation to these mites] As indicated on page 25 in A Manual of Acarology, 3rd edition (Eds. Krantz & Walter 2009), for a family member of these mites, the twospotted web-spinning spider mite, that when their webs are removed covering the eggs, this decreases egg hatching under either very low or very high levels of humidity.  Although these mites don't produce a great deal of webbing, it does appear that high humidity levels do affect them in a similar manner.  Further observations, as the humidity level of the tent decreases as the plant forms more tissues, should provide further insight into this. 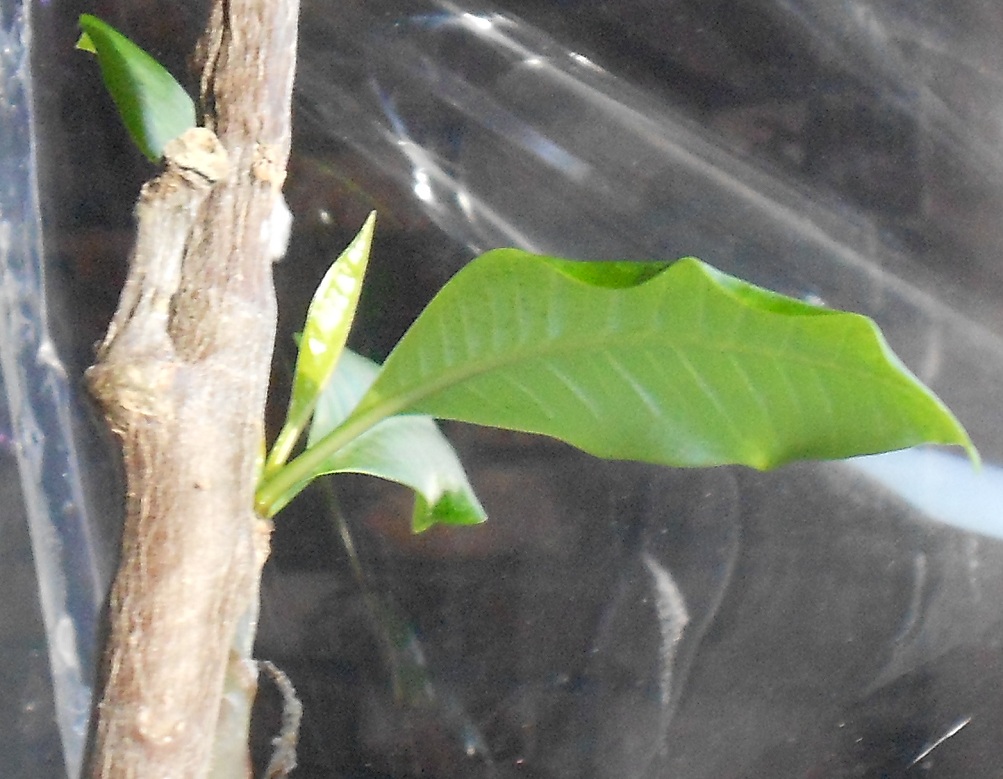 Note the dark green speckling on the underside of the leaf.  The wavy nature of the leaf results from their feeding as well.

Note the curling down and inward which the leaves do as a result of the mites.  Why they have, to this point in time, mostly left the lower of the two fully matured leaves opposite of the camera angle alone is a curiosity.  Every other leaf on the plant shows some sign of feeding damage. 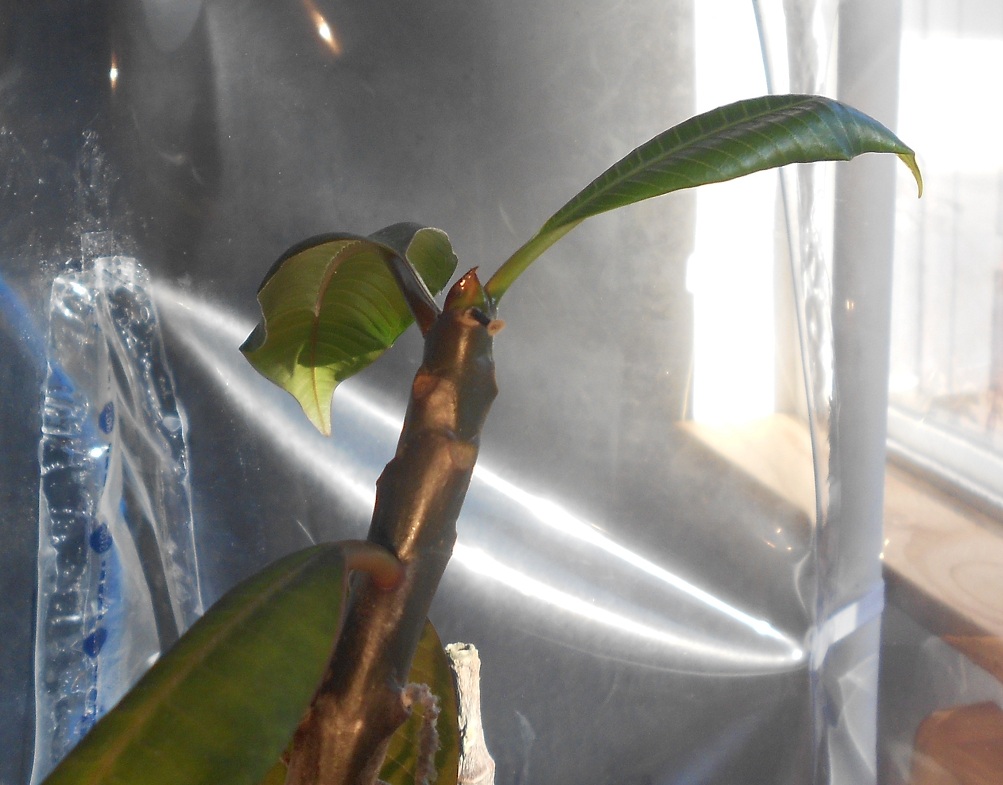 The under (dorsal) side of the leaf opposite from camera now has mite colonies, in addition to the heavy populations on the ventral (upper) side of the leaf.  Some mites have been visually noted (tiny specks which move) crawling on the newly expanded leaf which continues to curl inwards. 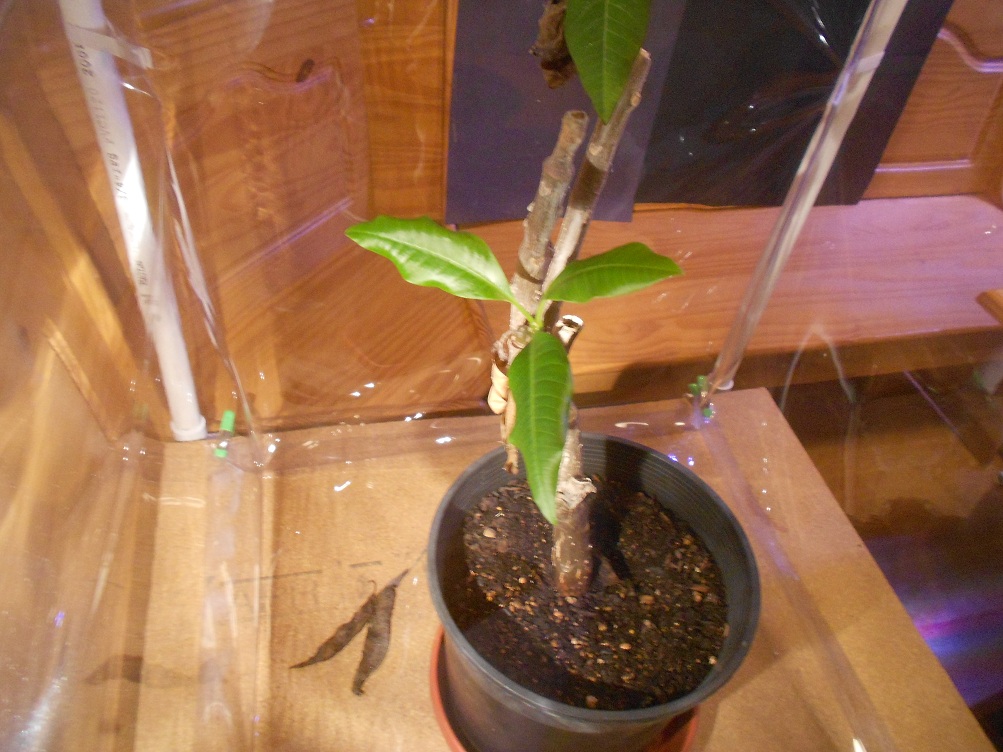 Note the lack of anthocyans being produced in the leaves which have recently expanded on the branch.  As this is a red shell offspring (rooted cutting of the "weak one" which perished) red coloration of some tissues is normal. 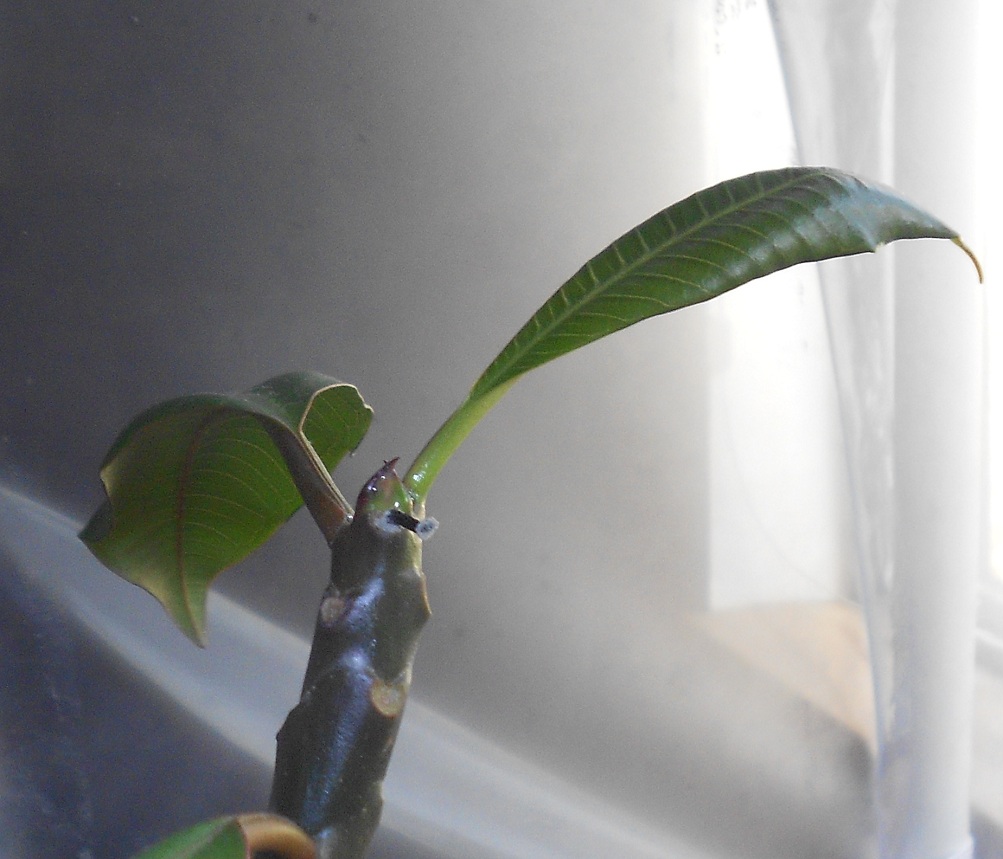 The tip of the plant in a stage which I have seen before.  Will it continue to push leaves or will those immature ones croak?  Note the saprophytic fungi on the dead petiole which is still attached and represents a small sample of dead fuzzy tissues on this stem..  Since the plant is contained in a sealed vessel (and it fogs up just like a tissue culture vessel does and therefore requires images to be taken from a side which isn't fogged up), why the upper part would be showing more signs of the saprophyte is rather curious. 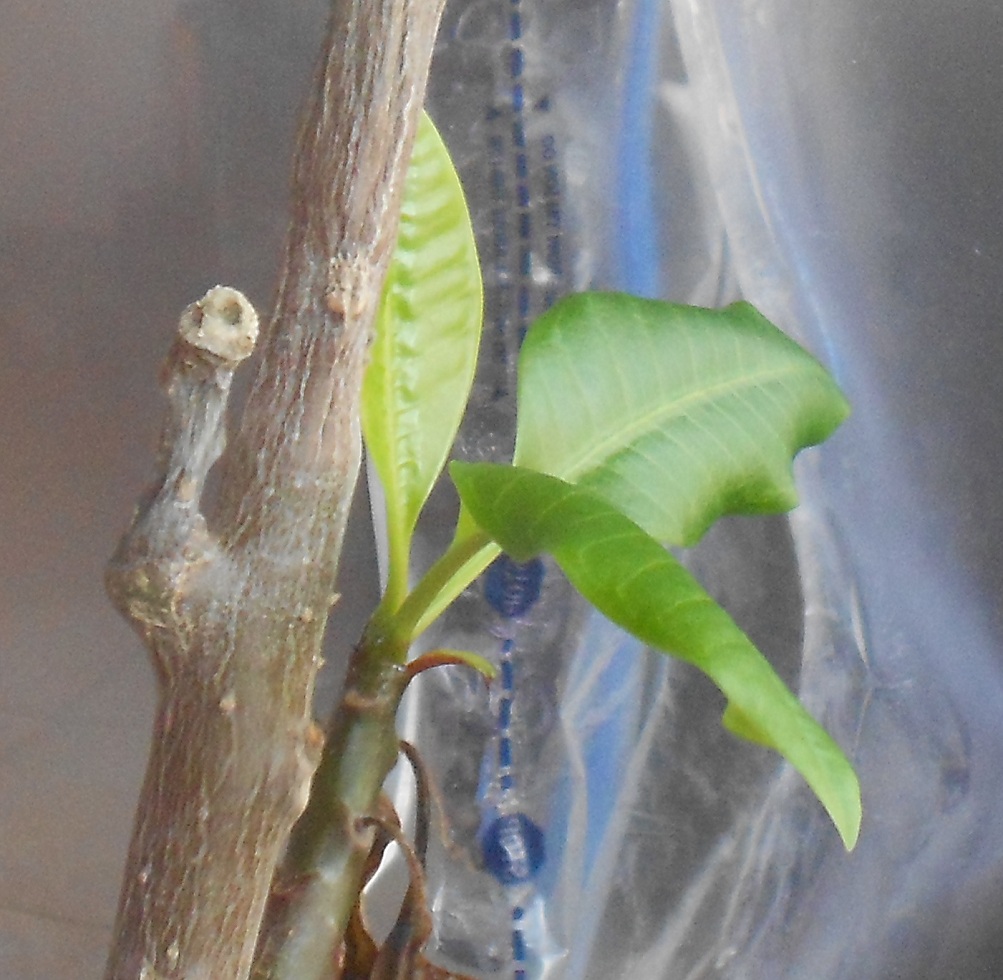 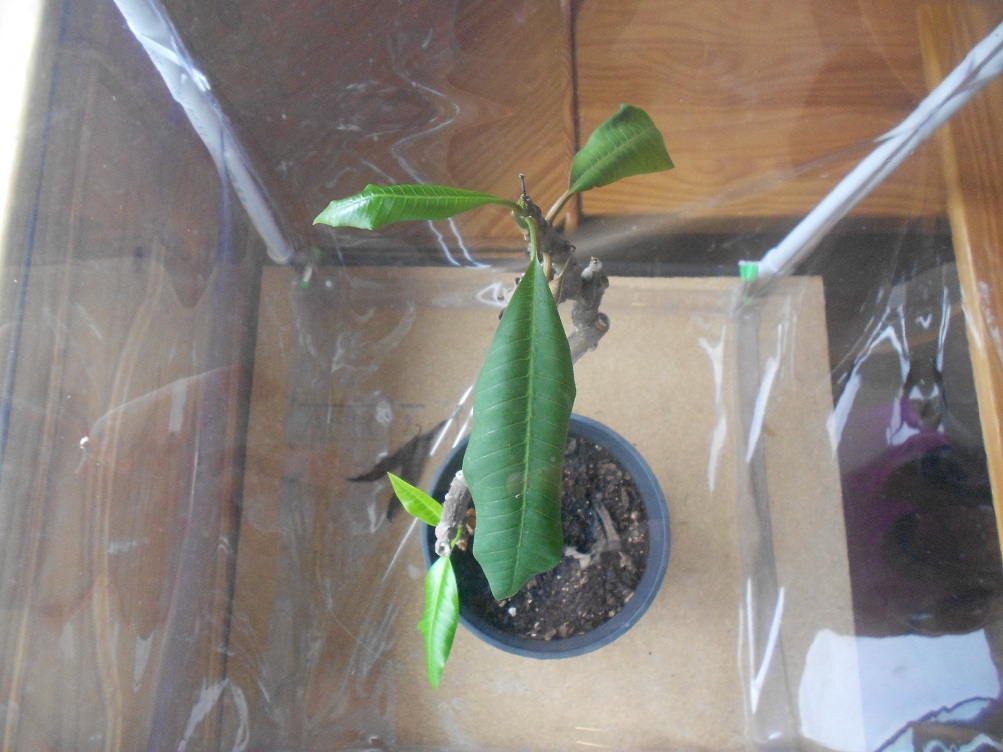 Curling leaves (top of plant) with the newly emerged leaf above being the sole one to push while below it is quite different with multiple leaves expanding. 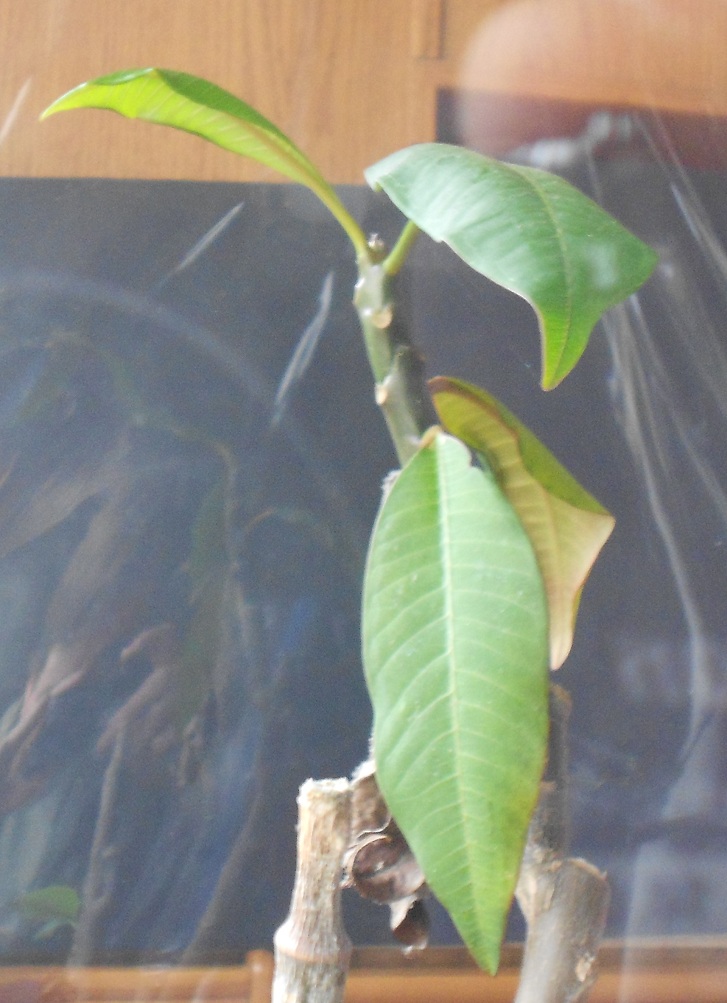 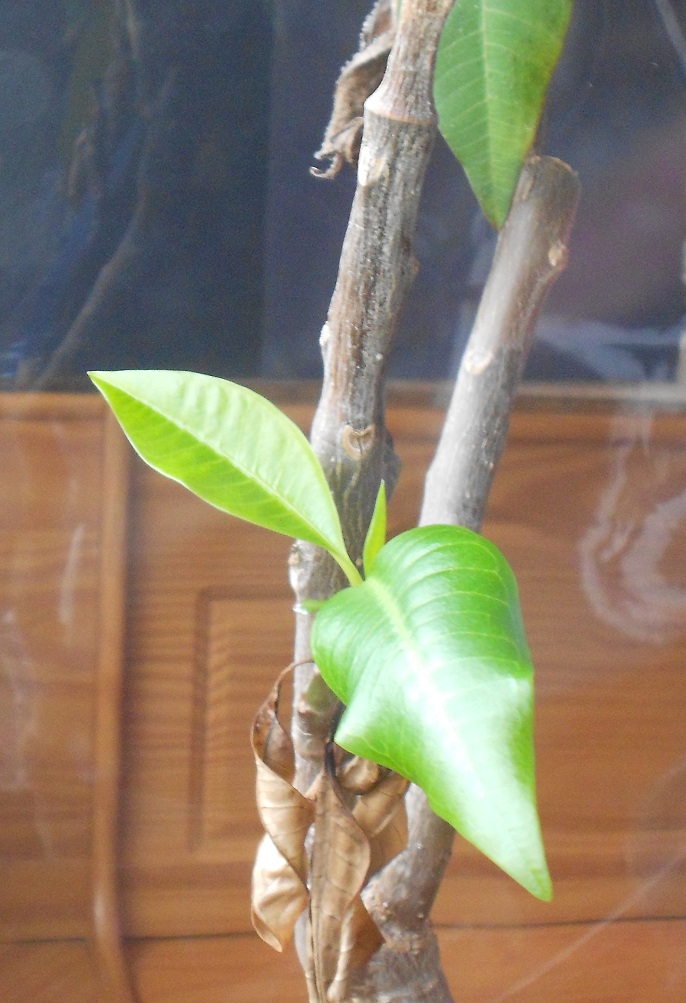 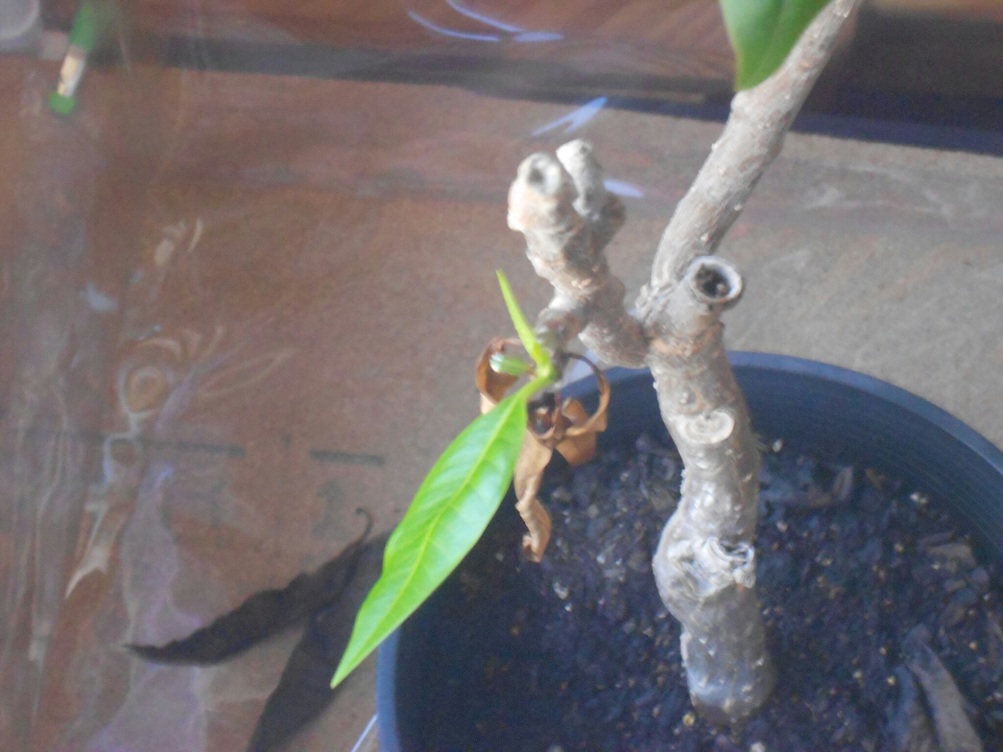 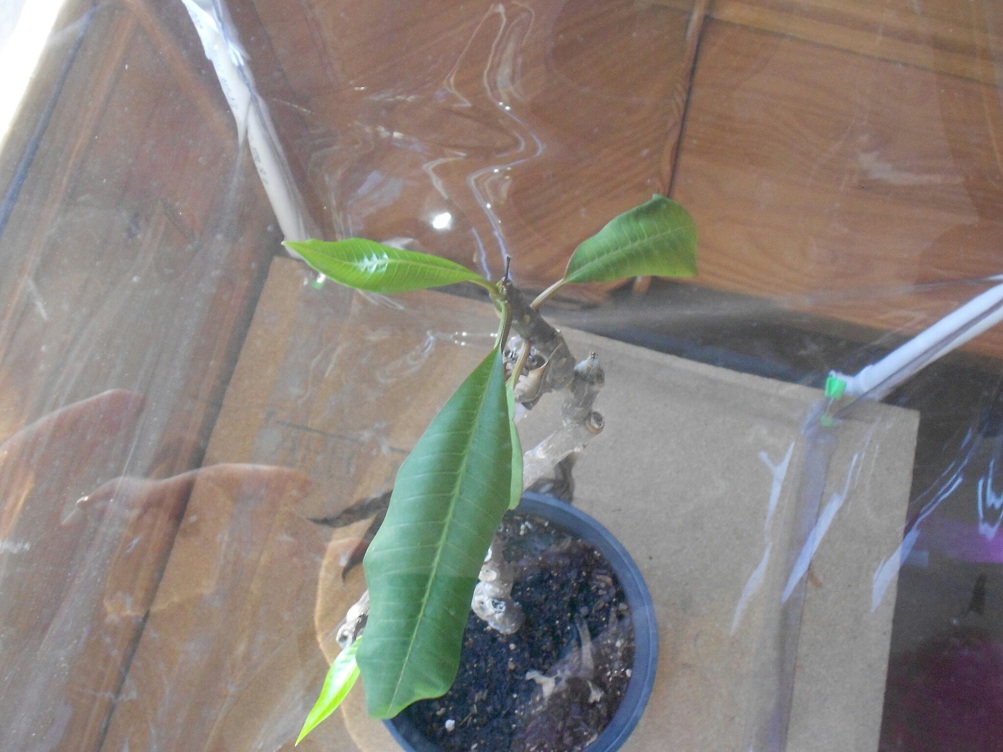 Newly emerged leaf doing the "funky growth dance" as the leaf tissues contorts to accommodate for damaged cells.  This is one of the leading indicators that there may be these particular mites present as they directly cause the deformation (see diagram above for details) of tissues, if not out right necrosis.  Again it would appear for P. rubra that having leaves already does help provide for some defense against outright necrosis but it would appear that isn't the case for P. x stenopetala, as the image further up the page shows. 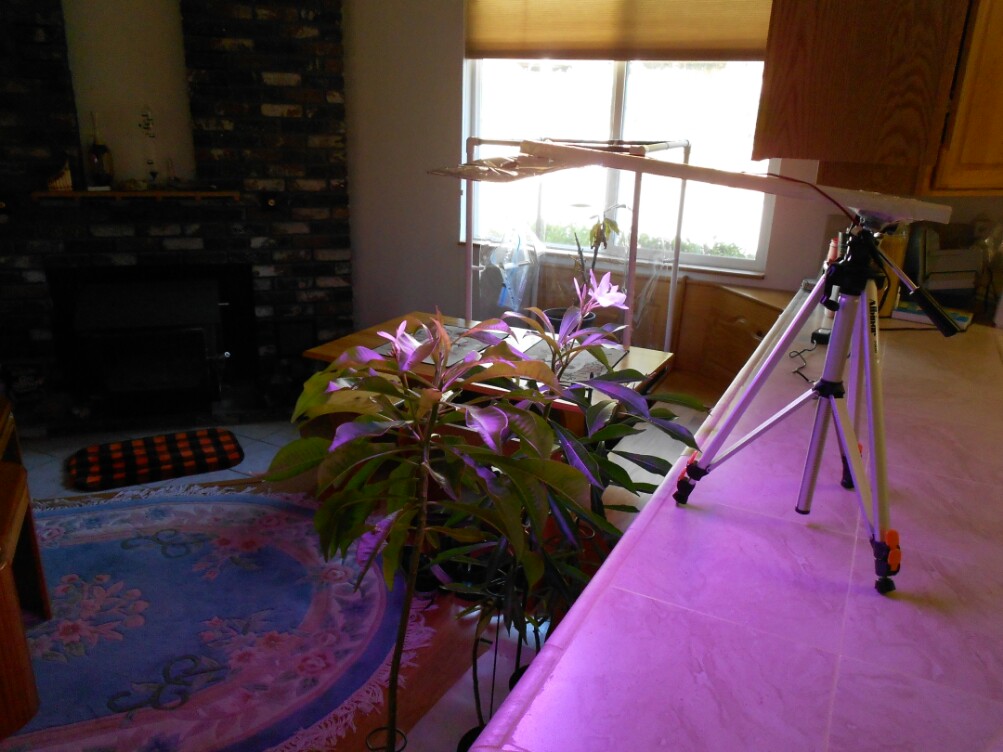 Homemade LED light array, with mite tent in the background. 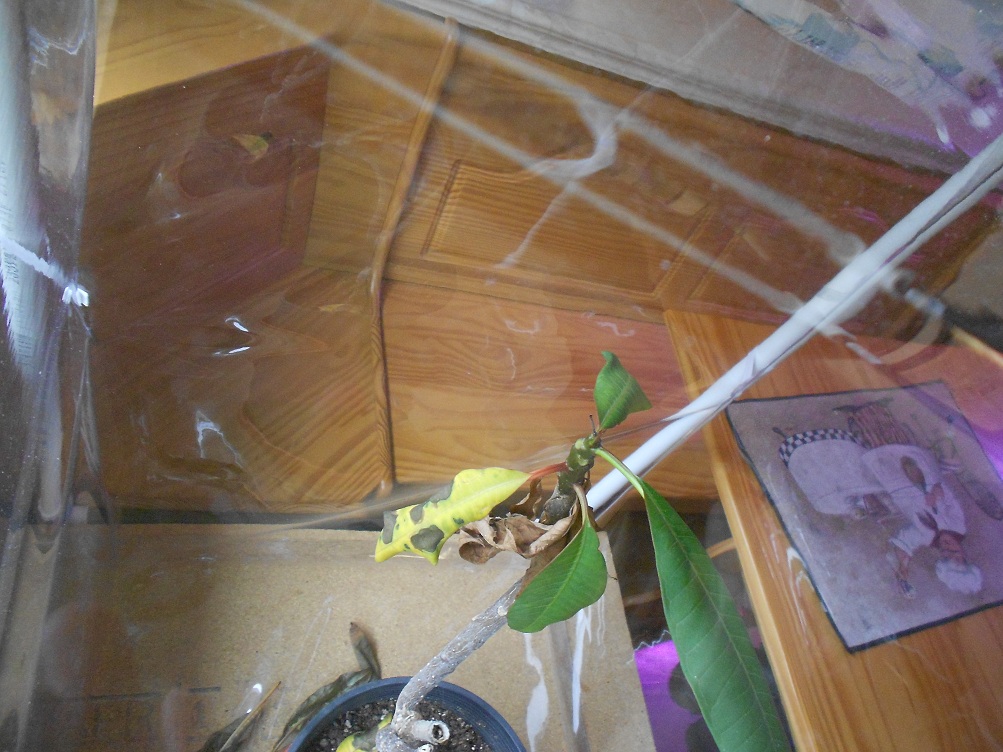 Some of the damage can be attributed to silicone vapors.  The bottom is sealed on three sides with silicone so that it can be opened and reused.

For access a ziplock style port is on one side (not visible in image). 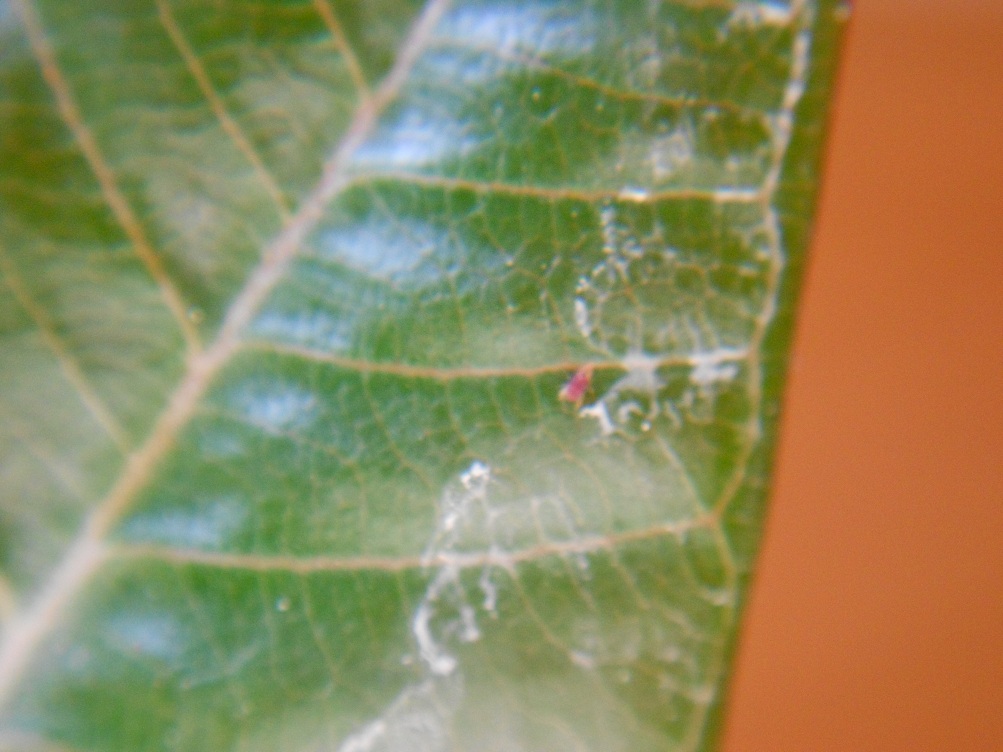 It is as close and clear as I could get it and attempts to grab it for a microscope slide using a chin hair follicle were unsuccessful.  Hopefully with later generations I'll have the luck again to grasp a few and get more clear images taken using a compound microscope.  This P. rubra was situated underneath the grapefruit tree in the citrus grove in my yard which has for years suffered from infestation, although treatment this year with a homemade insecticidal soap appears to have done a good job of controlling them, even though the grapefruit tree afterwards smelled like french fries (used cooking oil made into soap).

Ancillary images of damage to other plumeria species 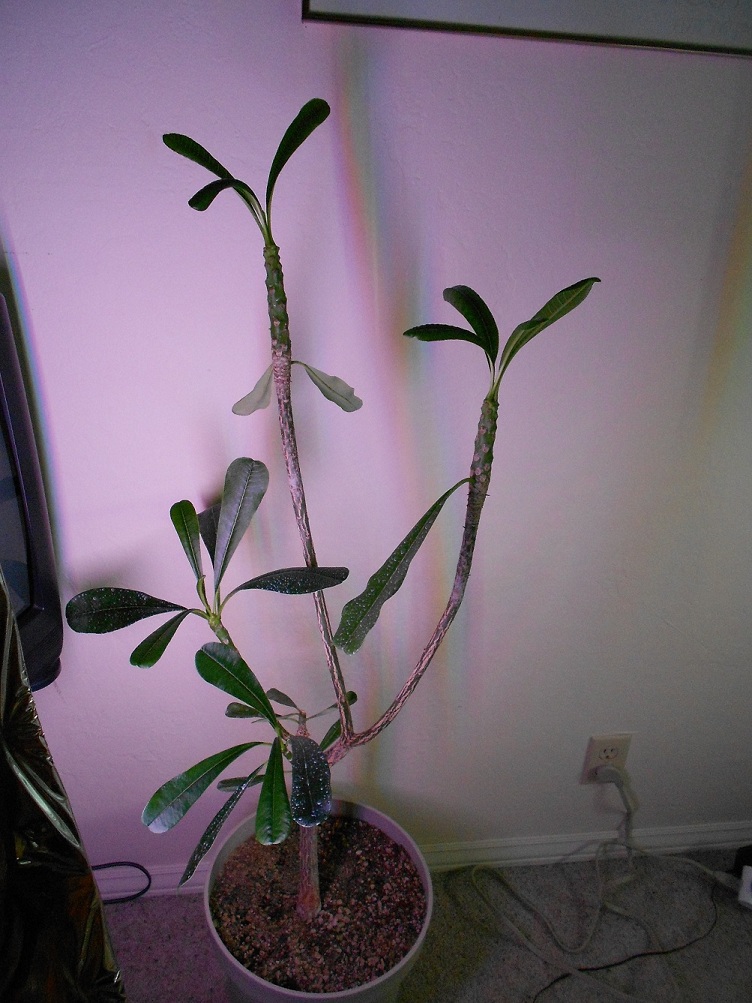 This P. obtusa (grafted onto a P. rubra root stock) carried in with it the dreaded little mites that cause direct necrosis.  Although not much damage is evident upon this plant (except that it almost totally defoliated), other plants (P. x stenopetala clones and P. rubra clone, all ex vitro tissue cultured plants) which were in the room and approximately 6 feet away from this one also became infested and required treatment.  The room was also "bug bombed" to clear it of these creatures. 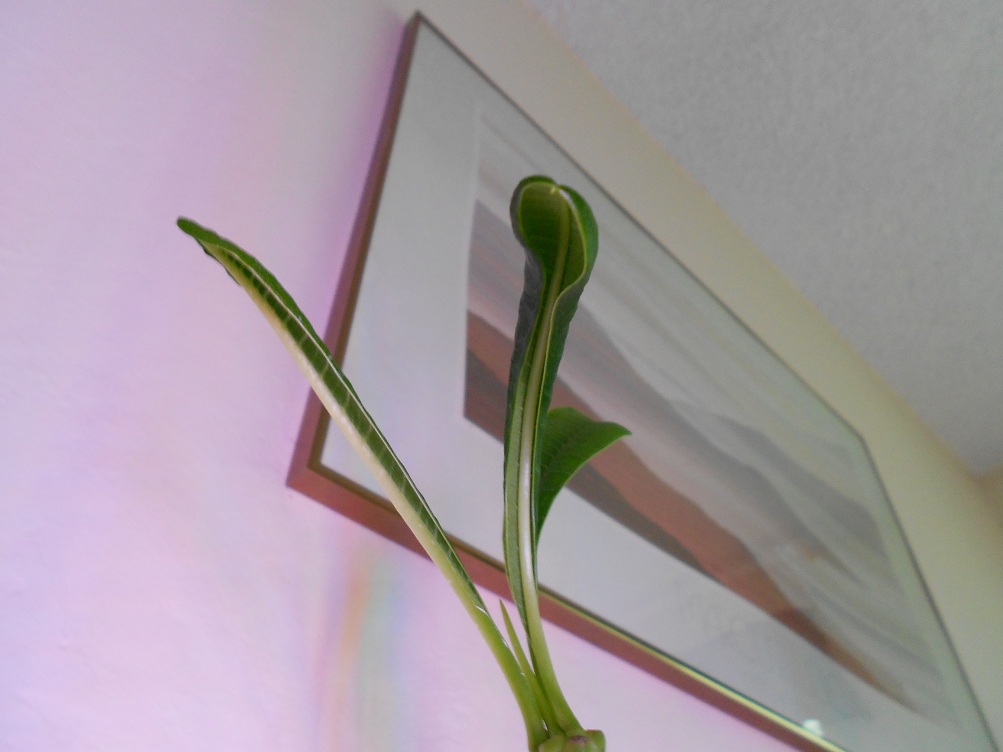 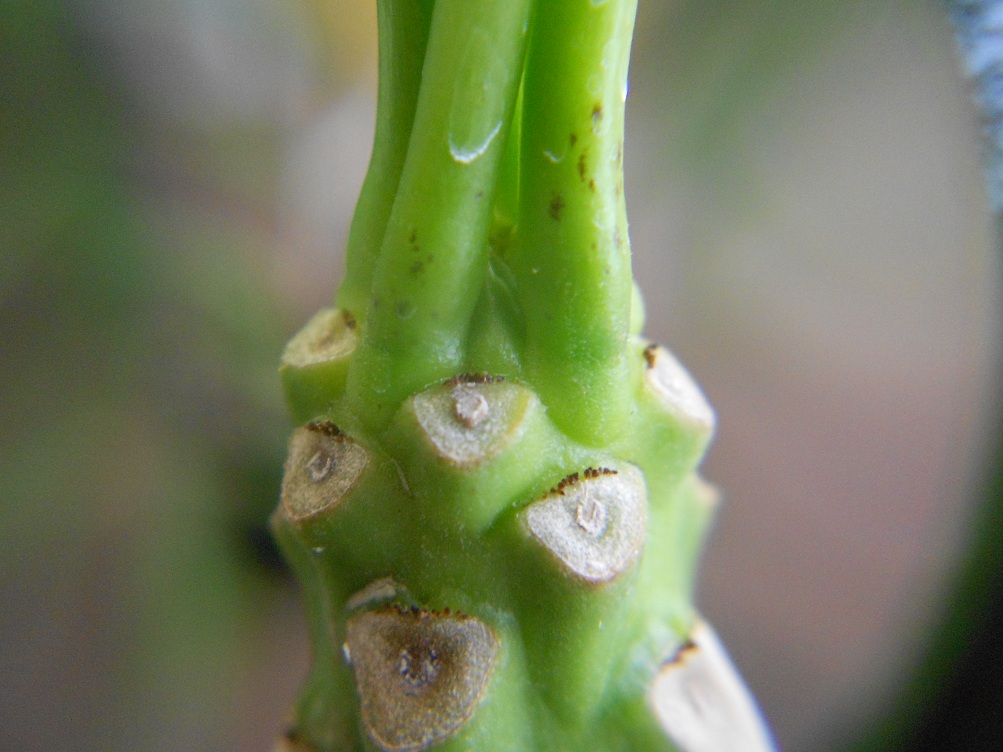 These dark areas on the green tissue are the first signs, beyond the curling leaf above, that there is something lurking.  Although treated, retreatment was necessary to ensure that anything missed by the first treatment will be caught by later ones.