Plumeria rubra -  Grown from seed out of Australia 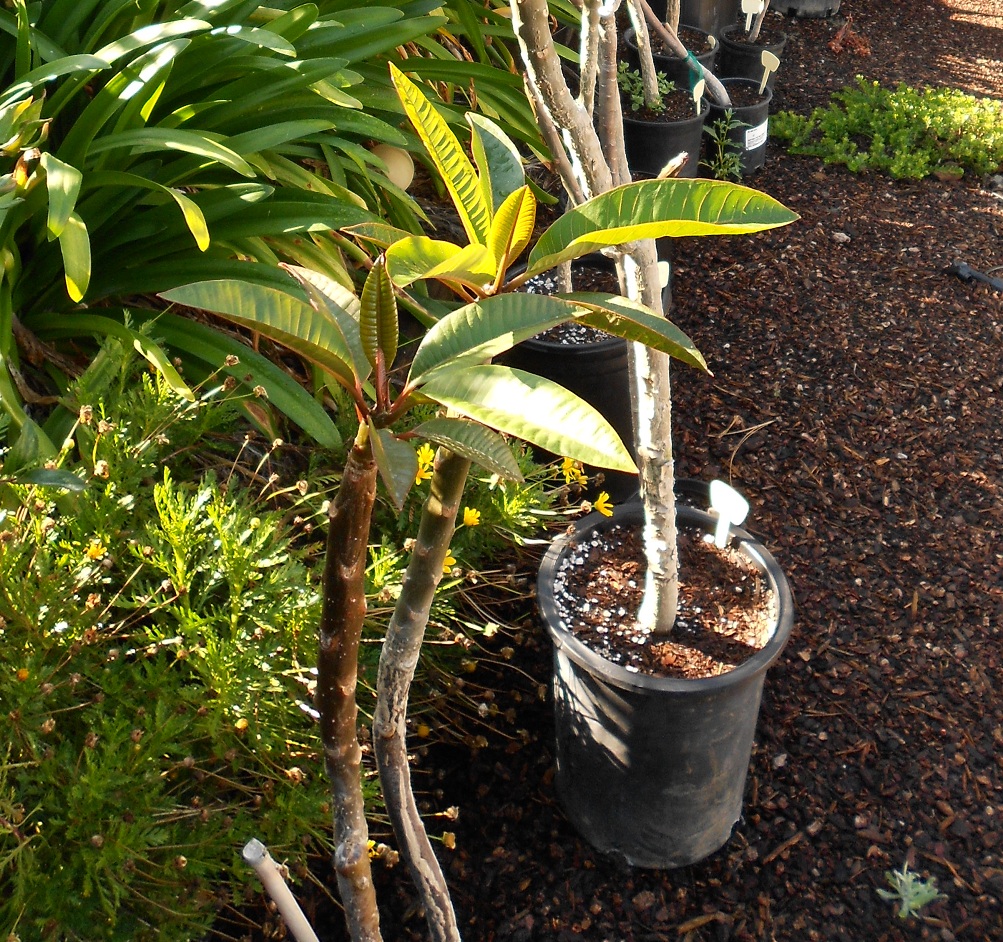 The plumeria in the forefront is that imaged below.  With the help of homemade insecticidal soap it overcame those mites which can be so damaging to developing tissues. 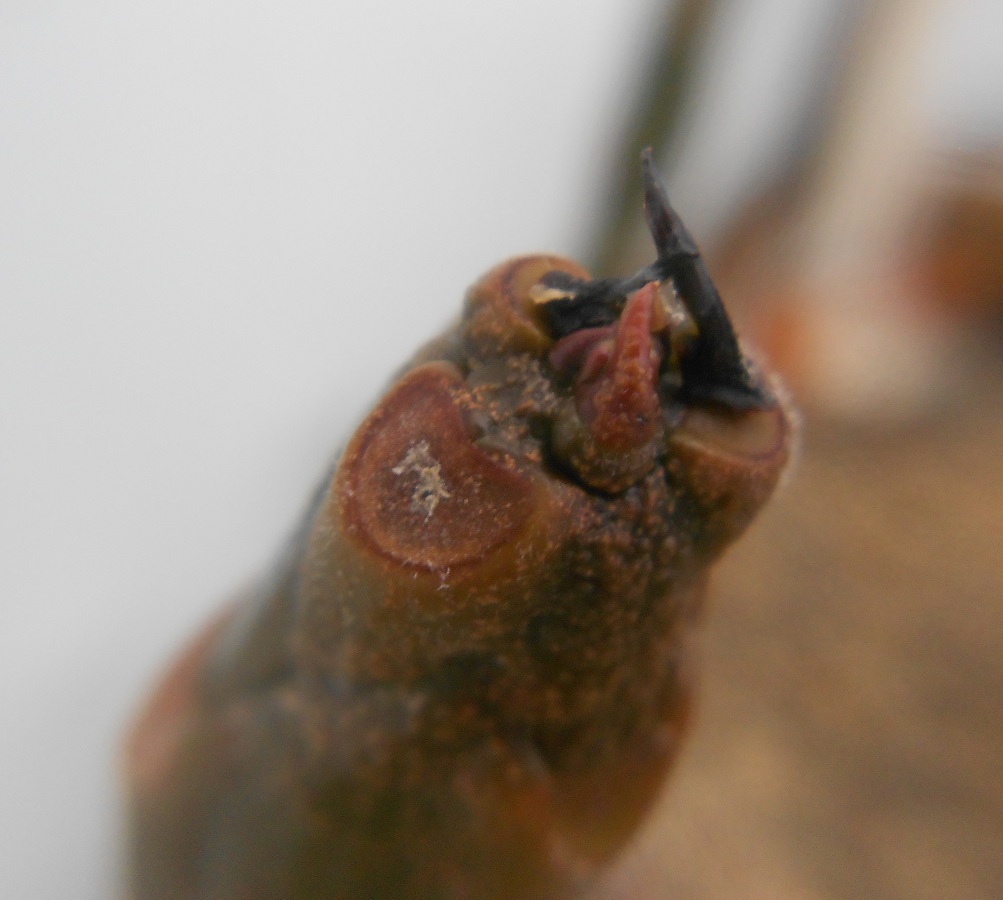 It would appear that even with all the intervention it was already too late for this tip as it has succumbed to the mites' feeding.  So far this is the sole Plumeria rubra residing in the greenhouse which has the "black tip" condition.  All of the P. x stenopetala clones have had or have recovered from "black tip".  The mites were rather hard upon them this dormant season and there is no fungus associated with this condition upon these plants.  However, the black spot disease which picks upon roses may be that which is found upon other hosts too which mimic and appear to be "black tip".  Whether the mites and a particular microorganism are interrelated is uncertain, but for plumerias, at least those within the greenhouse and those indoors this year, it is the mites that cause the "black tip" condition, not a microorganism.  This has been the same for the previous years, no matter the time of year that the condition occurs.  Note the blistering upon the tip, and that very same blistering can be found during the summer as well, and is related to the mites' feeding. 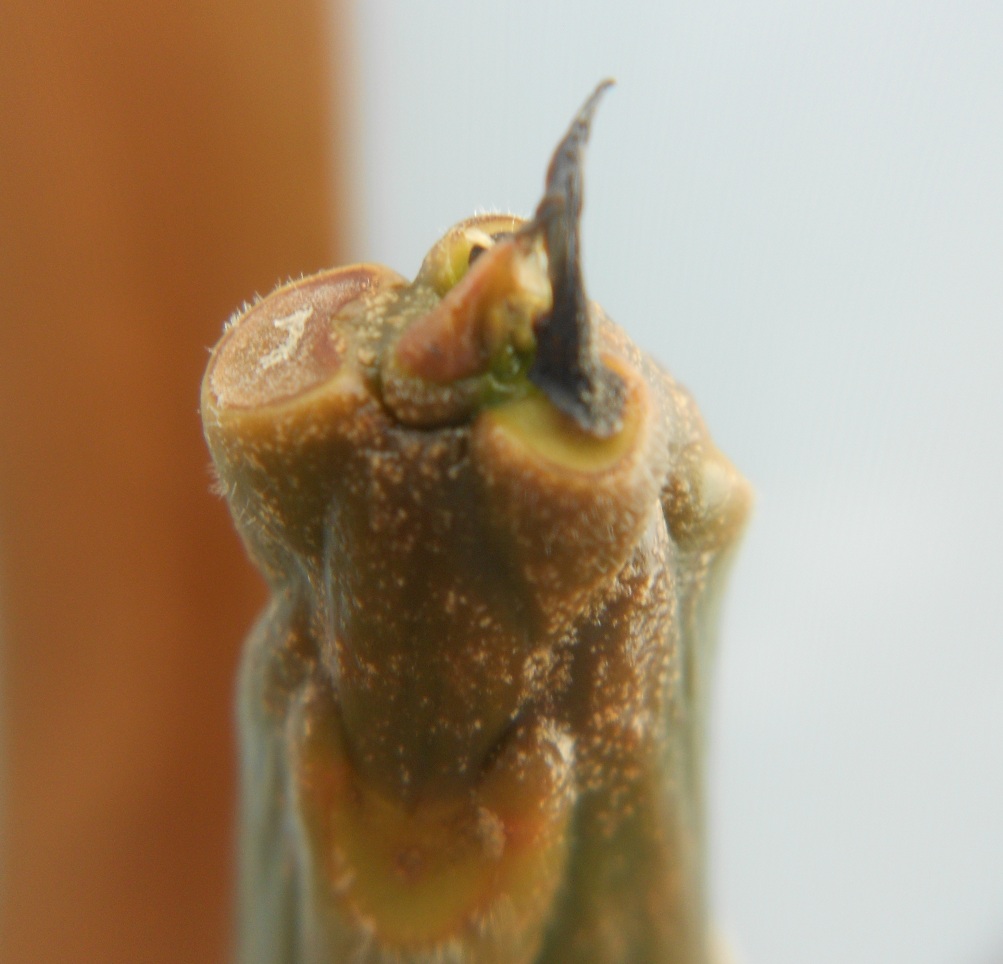 Although there is still some green still in the center the tip hasn't expanded as most other tips on other plants in the greenhouse have.  Additionally this is the single one which has this amount of blistering. 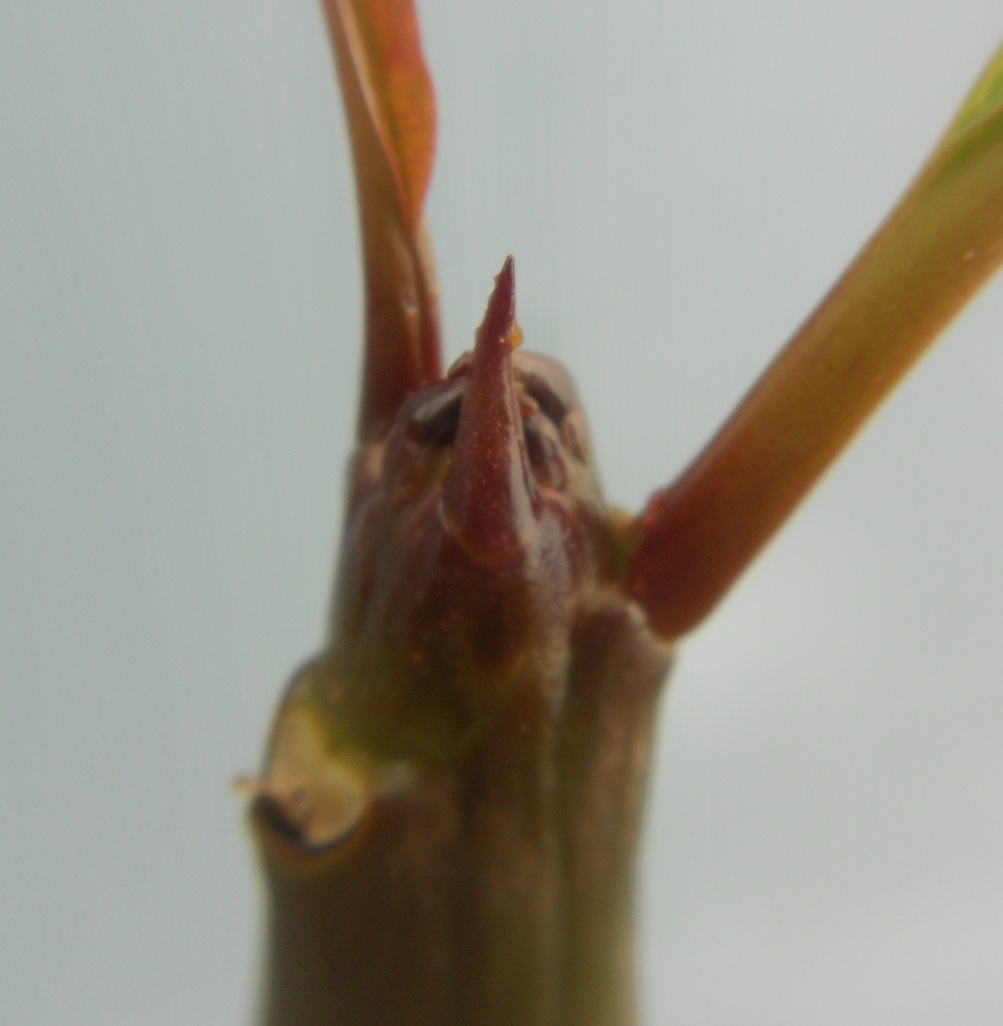 The above image is of another P. rubra from the same Australian seed and it is situated right next to the blistered one.  Still having its leaves and not as heavily infested as the one next to it was, it shows very little blistering or stippling of the tissues. 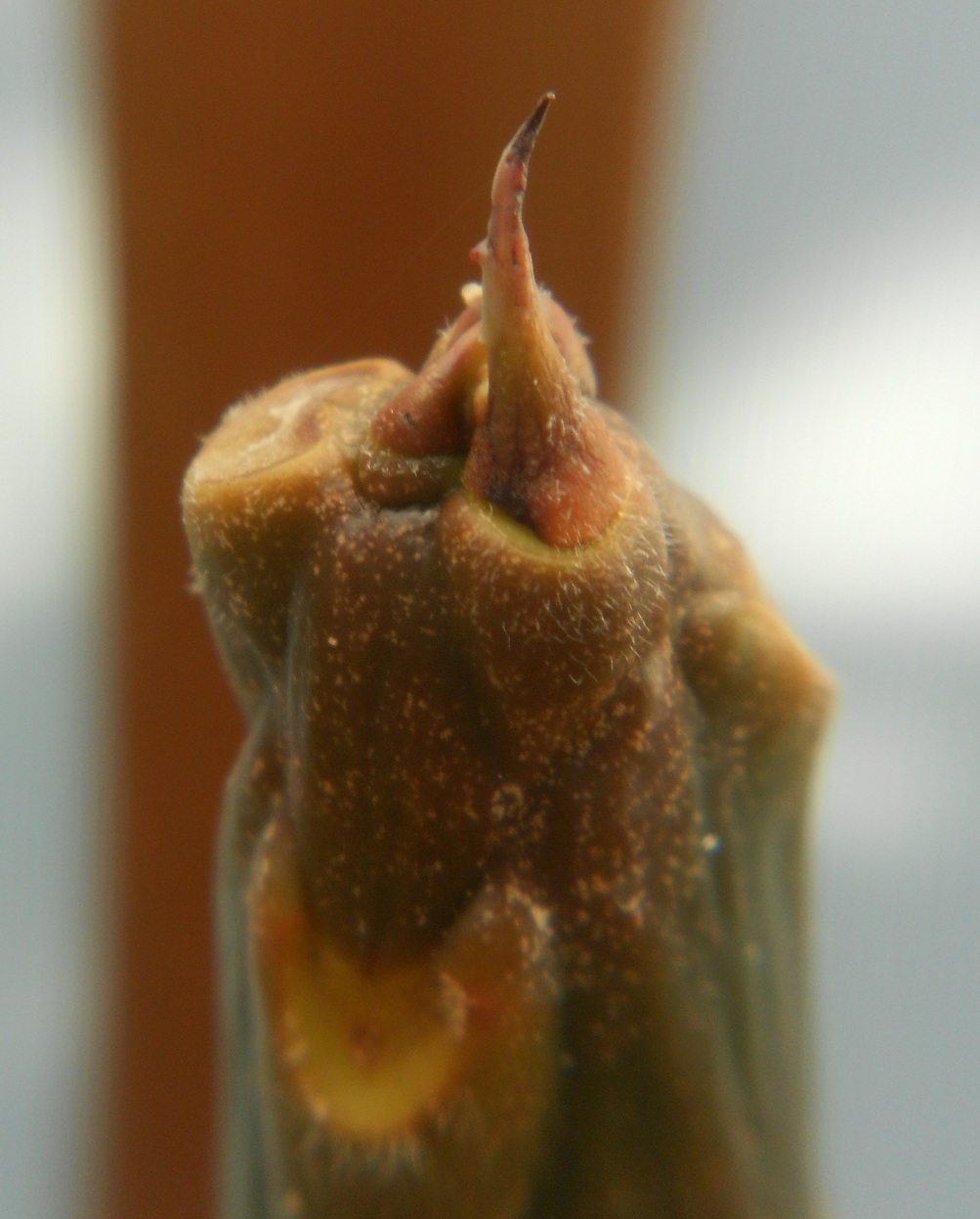 Note single silk strand in view, perhaps leftover from 6 days prior.  Both on the 27th and the 21st all the plumerias within the greenhouse were treated with a solution of insecticidal soap.  The humidity level in the greenhouse hovers around 89-90%.  Additionally, since they are in the greenhouse, the sunlight is filtered, which decreases the stress upon the damaged tissues.  From previous observations and, if this was another time of year and outdoors (lower humidity levels), it would be black not too many days after being damaged.  However, unlike P. rubra, which does show some necrotic spots on leaves under filtered light, P. x stenopetala also rapidly (within a day of damage to the tender tissues at ambient room temperatures) shows black necrotic tissue from these mites under filtered light and/or LED illumination.  As mentioned in the mite tent page, high humidity levels more than likely decreases egg hatching, which can help keep population levels low. 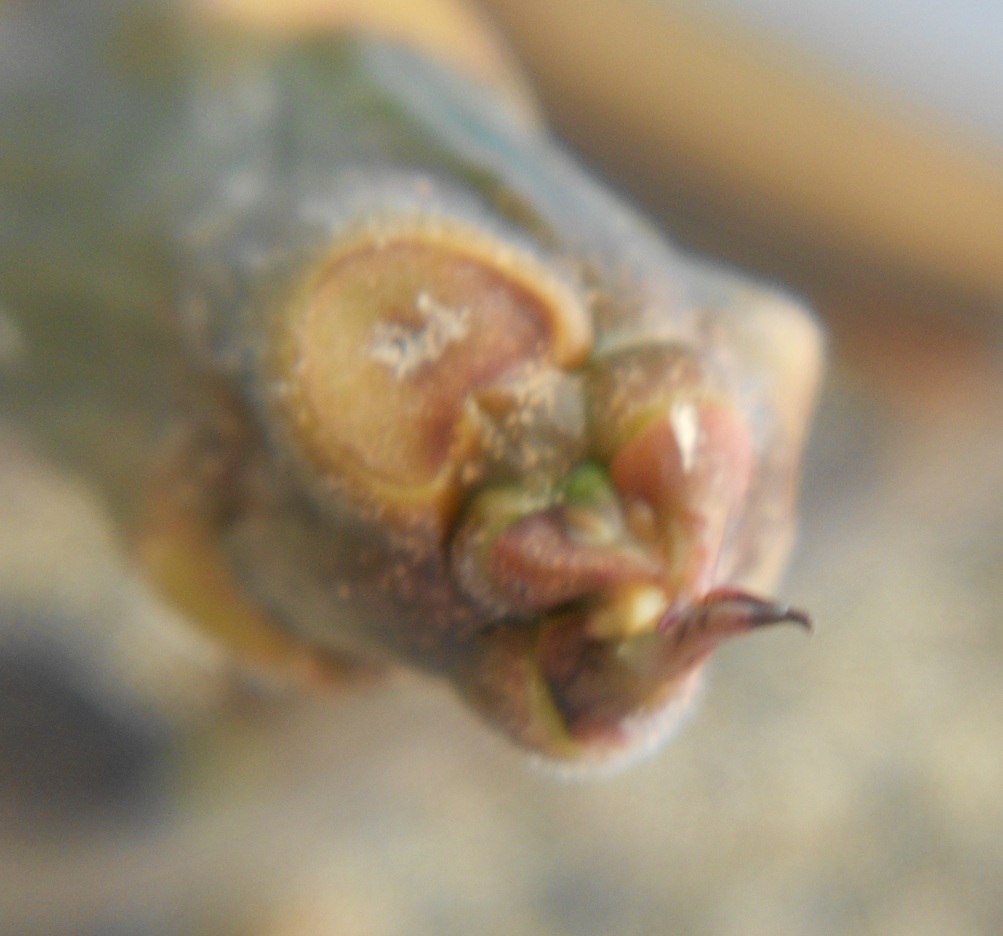 Top down view and it shows a bit of green still at the tip which indicates that this time, perhaps, which would be a first for me, the tip was actually treated in time to save it. 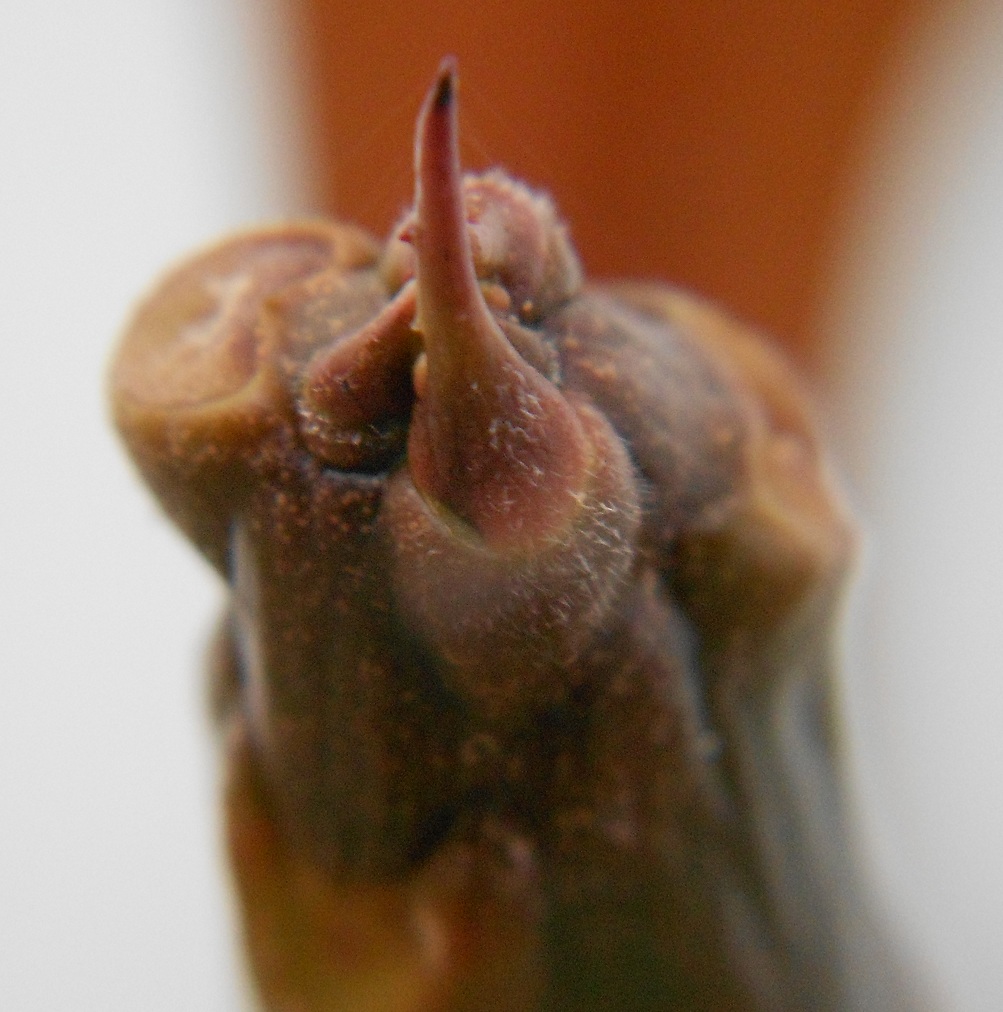 Note the fine webbing at the tip of the dying immature leaf which attaches to other points on the dying tip.  To provide for some scale here, these mites are approximately 300 microns long.  My height is just a bit less than 6 feet.  Using those round numbers and say a 1/2 inch by 1/2 inch cube as the "tip" height, base, etc., then the cube which I would be standing next to of equal height would be 254 feet per side.  Since it doesn't take many of these mites to do this damage, that is similar to a dozen or so people attacking a plant 254 feet per side and actually having an effect purely by damaging the surface.  Again it should be noted that all the plants in the greenhouse were treated with chlorothalonil which inhibits fungal growth.  In addition, all the plants are being treated with insecticidal soap weekly, but as the fine strands of web above show, perhaps that needs to be every 4 days or so, as the anti fungal agent more than likely decreased the generation interval for these mites.  With these treatments no fungal growth has been noted on any plants nor has any stem rot been observed to date. 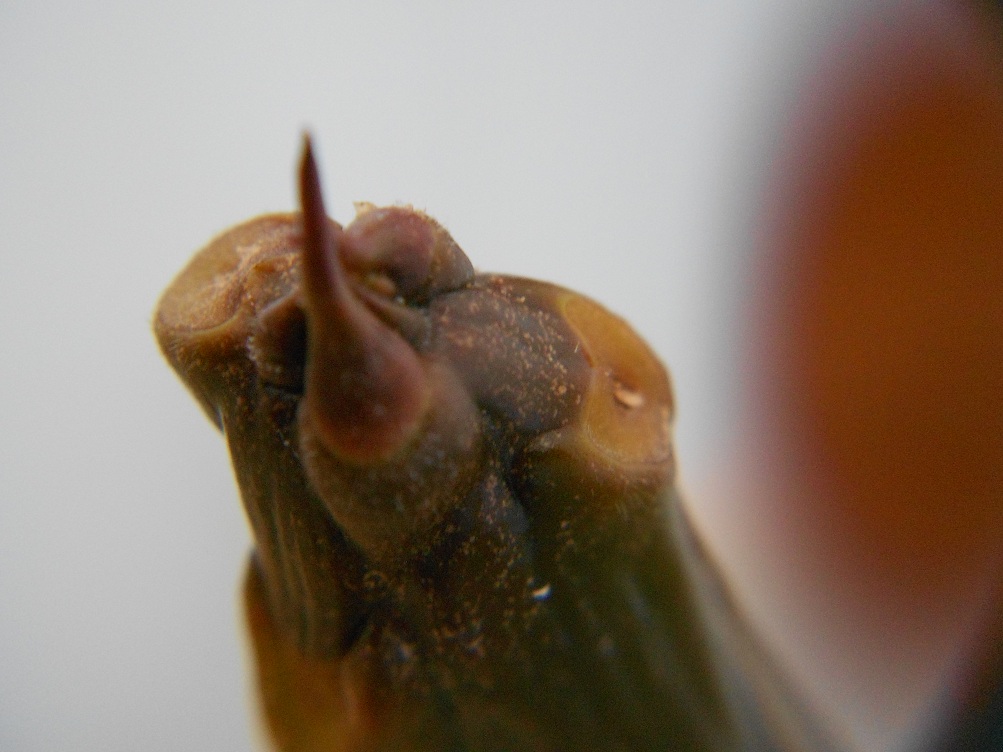 Note the lack of fine webbing.