Species from yard identified so far...

More detailed pages on the below can be found on the plant host list page. 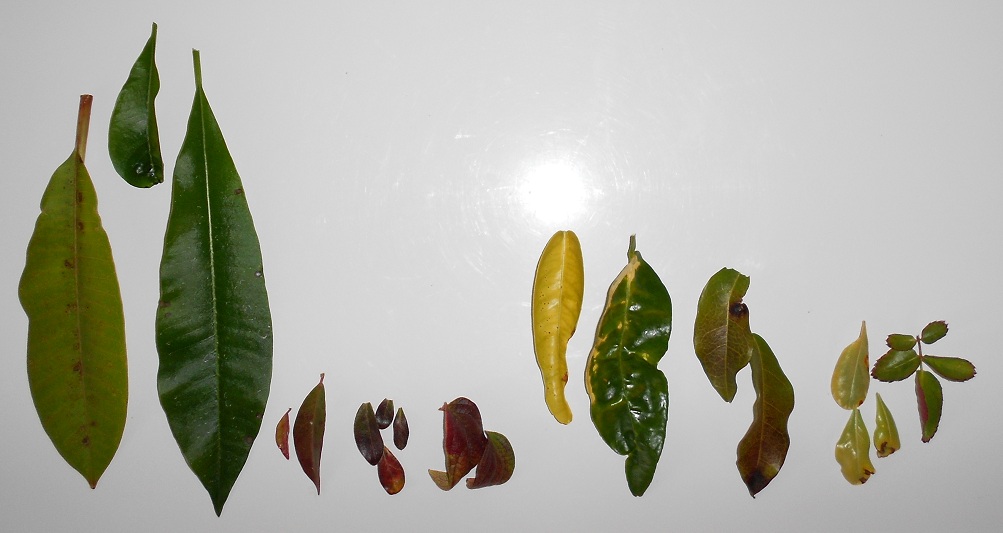 The above array of leaves represents samples from those species of plants out of the yard which are demonstrating sixspotted web-spinning spider mite infestation.  Oak leaf samples have been omitted until I can get up into various canopies.  However, since both plumeria and violet trumpet vine have been infested by these mites while in close proximity to the blue oak next to an elevated deck, further samples from growth later in the spring should provide further insight, as initial ones did indicate necrotic spots, and although those could be confused with a fungal pathogen, they are not tar-like in nature but rather the same tissue spotting that is seen on various leaves of other species. 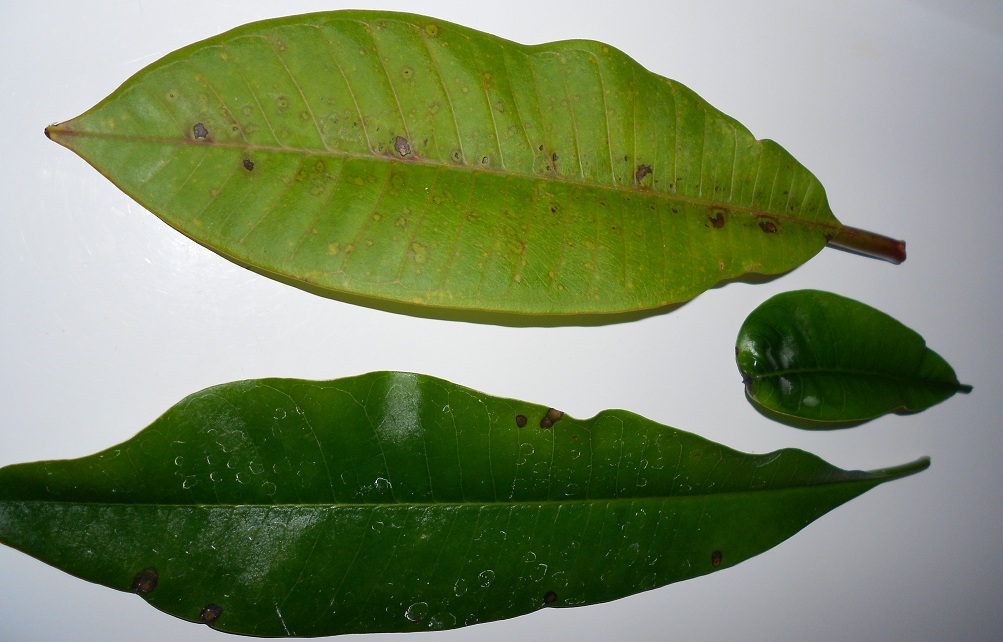 These leaves include Plumeria rubra (top and a bit more yellow - from the greenhouse) and P. x stenopetala (e2 from inside the house).  See current winter's research regarding treatments these plants have undergone for information as to chemicals and/or type of soap.  Leaves which are already expanded demonstrate necrotic spots while elongating tissue deforms, along with direct necrosis at leaf tip.  Other images of warping, downward and inward curling, tip abscission, etc. can be found on other pages on the site.  Additionally, it should be noted that although not imaged, these mites do cause deformation upon P. obtusa leaf tissue (curling downward and inward), plus black stippling on the underside of the main ribs of those leaves. 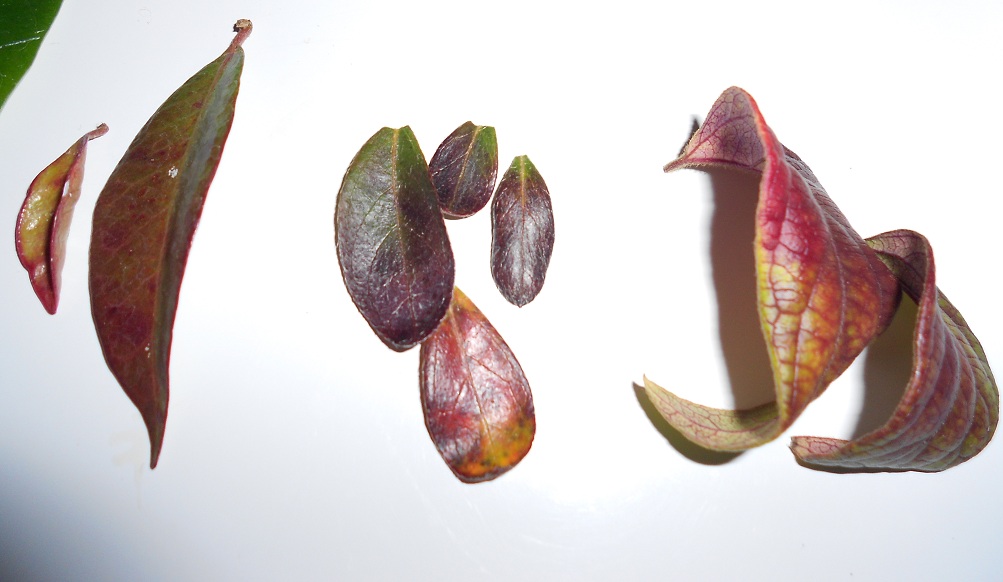 From left to right downy jasmine (small leaf apical stunted growth), azalea, and Japanese honeysuckle, which is normally? purple on the underside but not the top. [Noted on 02-02-12 "normal" growth on a tendril of the vine which had made its way south to the agapanthus and is green, without much purple on the underside.  New growth is noted as having purple too, at the top of the plant, which I thought was normal. Whether the Little Black Ants help keep the mite populations down on this vine is uncertain.  Noting now that the P. x stenopetala clones were right next to this mite infested vine all summer long and were free of deformities and had blooms and tissues free of necrosis, the LBA's did a wonderful job protecting the plumerias while they were on the plants, as I've indicated in the section on them, but to understand now the high population densities which were upon this vine just feet away and yet those still had no visible effects (beyond fine webbing on emerging blooms as can be seen on the predators page) upon the plumerias until the LBAs were gone (and without any treatment during the season other than a few induced rain events), well, sortof boggles my mind at least.  Predatory mites are rarely seen around the yard.] 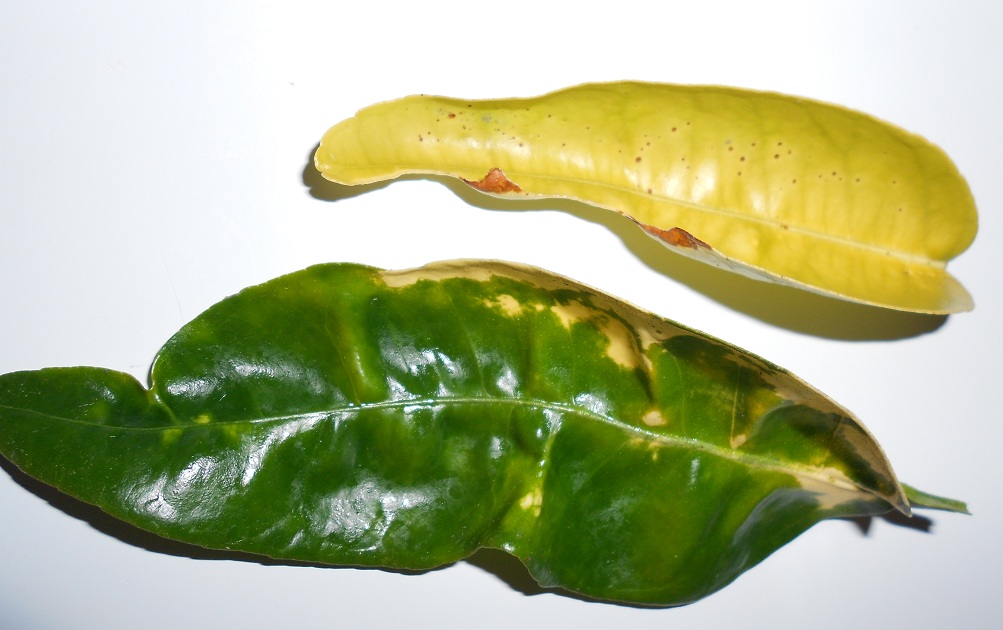 The smaller yellow leaf on top is from the top of the tree and was the final growth of the season.  The mites appear to have mostly reached it after expansion.  The lower leaf was gathered from the lower canopy and is upon earlier season growth. 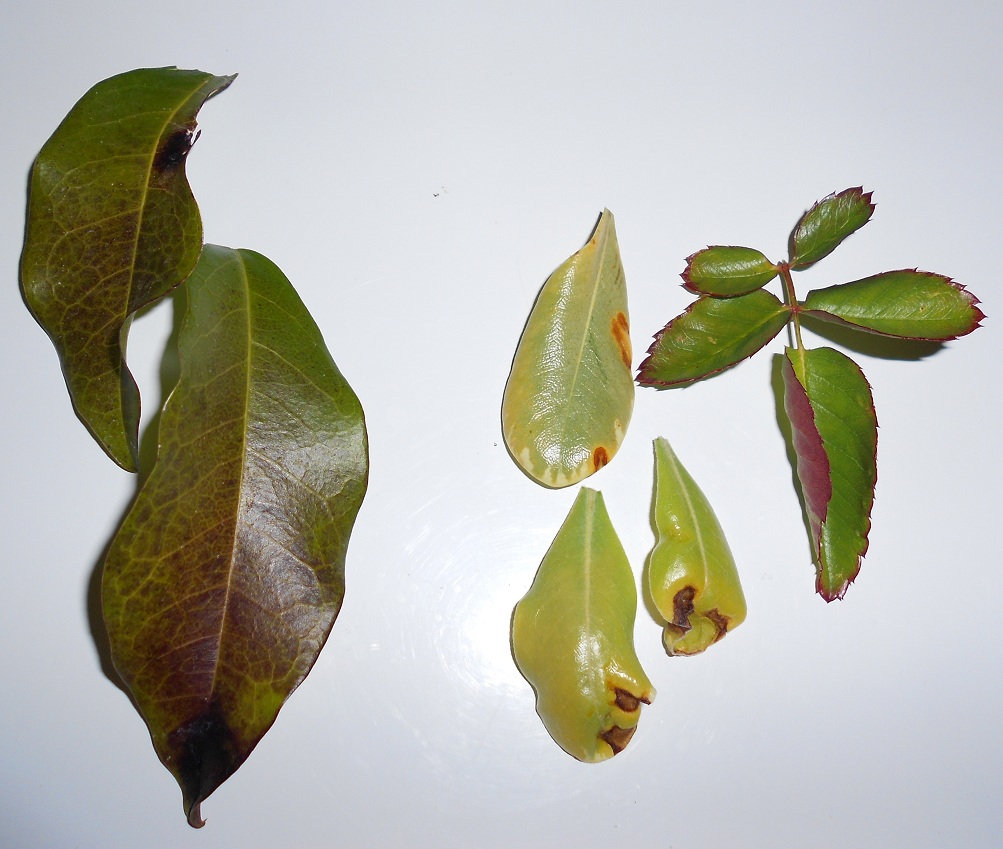 Violet trumpet vine, Japanese mock orange (variegated), and root stock rose which is intertwined with the mock orange.  Microscopy of the another adjacent rose leaf with a necrotic spot showed the few strands of fine webbing these mites leave behind.  The mock orange leaves show earlier season growth on top and bottom those which have just recently expanded.