After spending many years now with plumerias and learning how to "not do" things, this year I get to experience something somewhat different.  Not only has one Plumeria rubra, common yellow, been blooming all summer but the other two limbs decided to also join in the fun and other plants sensing this, too are forming many bloom clusters and not just on P. rubra but upon P. x stenopetala too, ones which have been out of tissue culture for a couple of winters.

Year in and year out, except for the first year I was growing them, the plumerias, no matter where I had them (blind area worked pretty good though- except near the "door"), always needed treatment, especially for spider mites.  On my deck, which is elevated off the ground about 12', I got to witness the first vestiges of the "black tip syndrome".  After chasing my tail for a period of time I discovered a little pernicious mite was doing the damage, one which I previously hadn't been familiar with, the six-spotted spider mite.  Although biological control methods are mentioned in the UC IPM Online Pest Notes write-up on plumeria and these creatures, and it does mention quite a few creatures which help control mites, there are a few others which should be mentioned.

As this is September, I would usually be very tired of having to treat the plumerias for mites, either two spotted (not so bad) or six spotted (bad).  Although the plants did receive a chemical treatment for Western Flower Thrips, Frankliniella occidentalis (Pergande) before coming out of the greenhouse in May, no other spray has been administered to the plants this season, except for two "rain" incidents.  As I discovered upon red shell siblings, two spotted spider mites had made an infestation upon the plants and I did think about treating.  But instead I sprayed the plants off with a gentle rain (shower mode on the nozzle) and by the next morning the affected plants which didn't have evidence of ants prior to the rinse now did, and in abundance.  Little Black Ants.  Monomorium minimum, are native to North America (Not Wiki but better explanation) and have been a pest in my house every winter, in one particular area, the kitty room.  For some reason the cat food they find most tasty and I have to treat to chase them out. 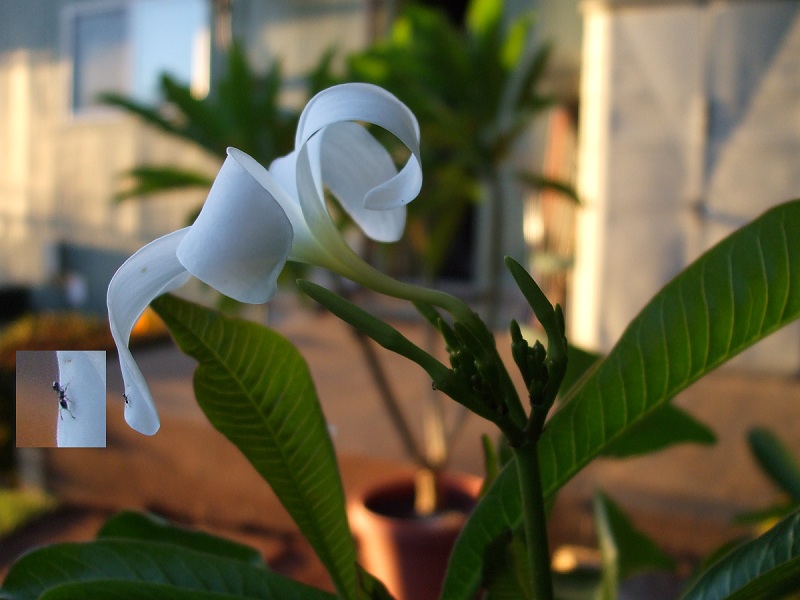 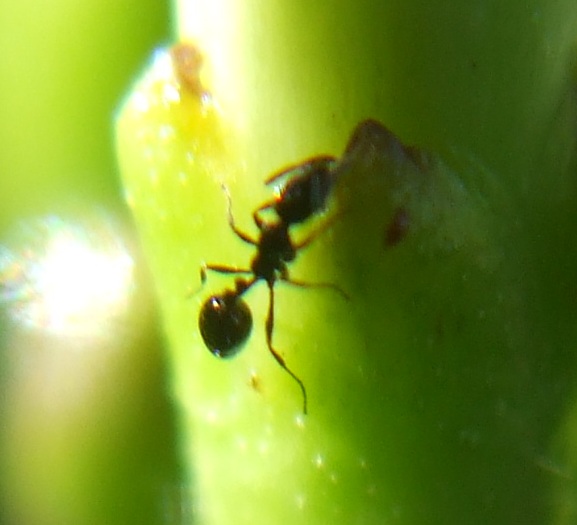 That is a worker who is feeding upon sugary secretions which plumerias, under good hydration, will have, especially in the forming bloom clusters, and near the base of the petioles of newly formed leaves.  These same delicate tissues are also liked by the six spotted spider mite but not so much apparently for the two spotted spider mite, as those plants left alone to fend for themselves this year demonstrated no signs of infestation on newer growth. 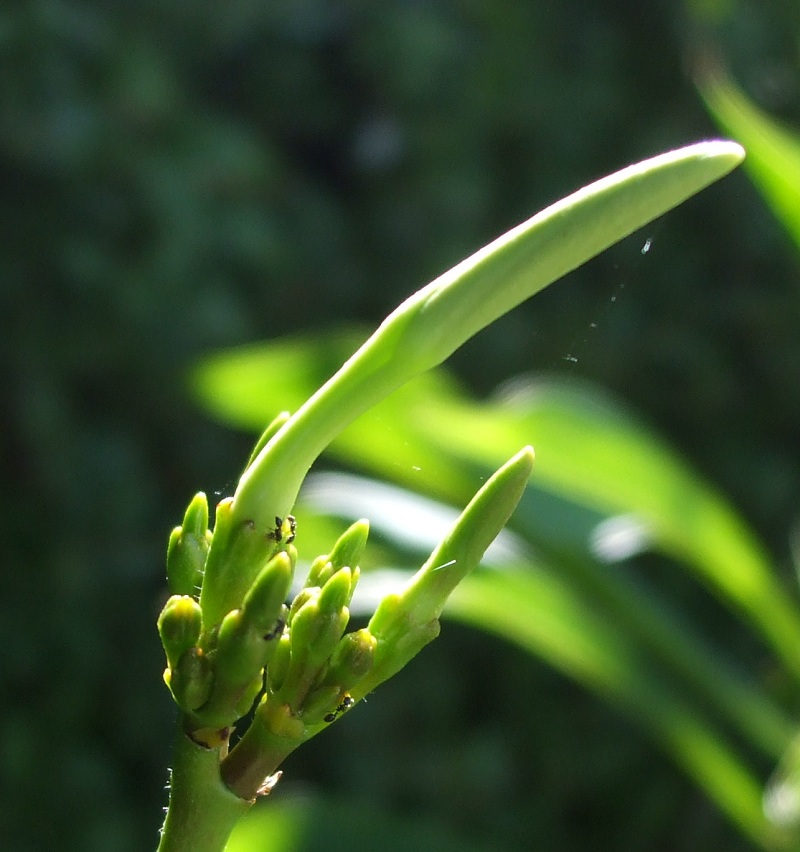 This is a forming bloom cluster of P. stenopetala, with many of them crawling around.  Image taken 9-22-11. 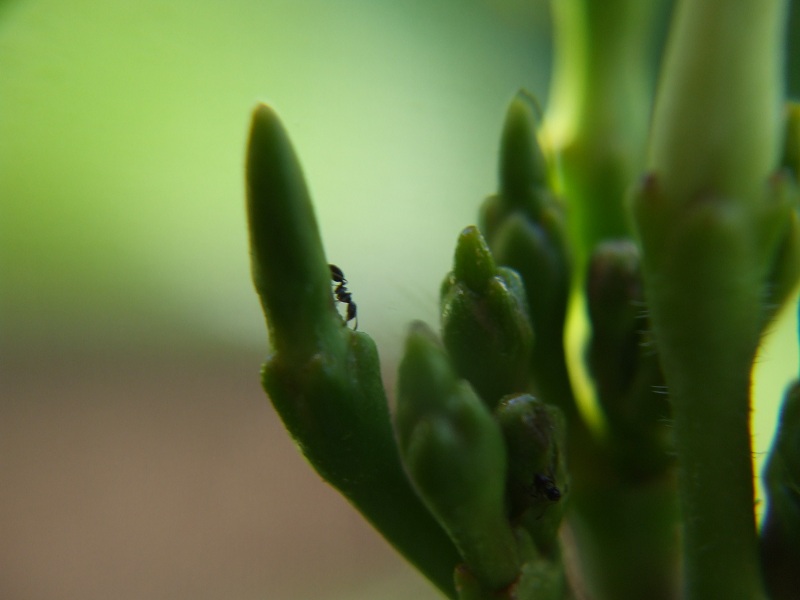 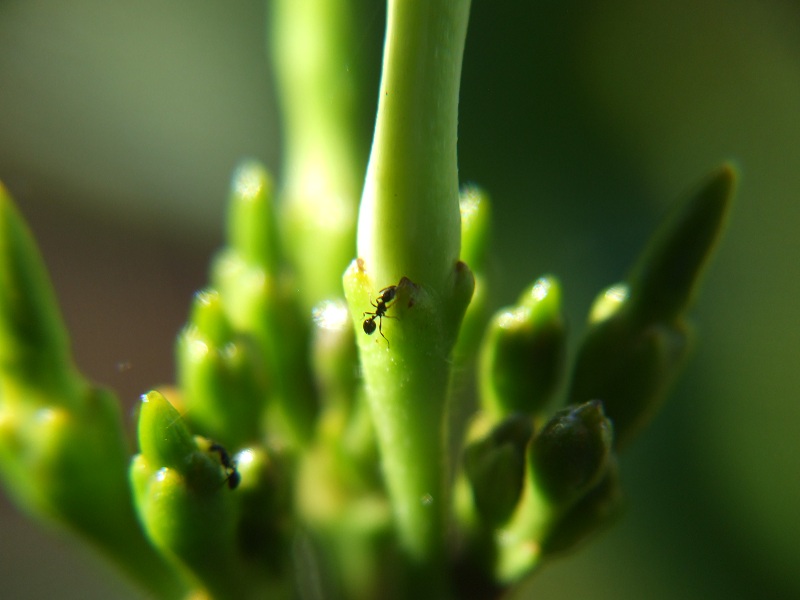 Larger pic of the first image. 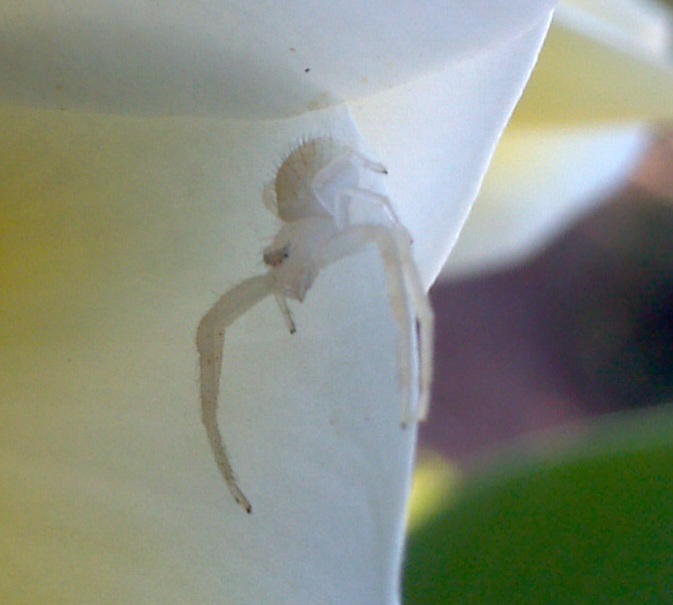 And if you think that the Little Black Ant gets to have all the fun, there are always crab spiders which also can take up residence.  This one raised a clutch of kids and was very protective, coming to forefront every time I tried to sniff a bloom, side effect of bio-control. 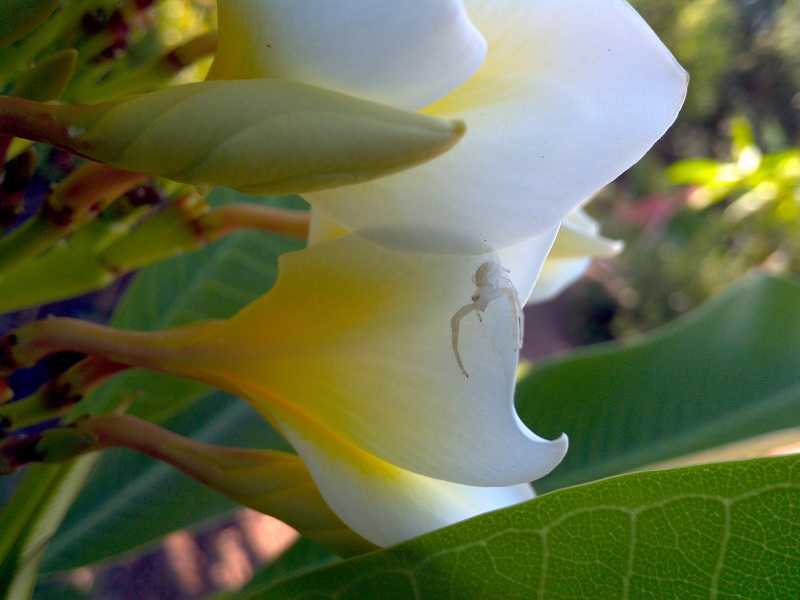 Working with nature, not fighting it, well, mostly. 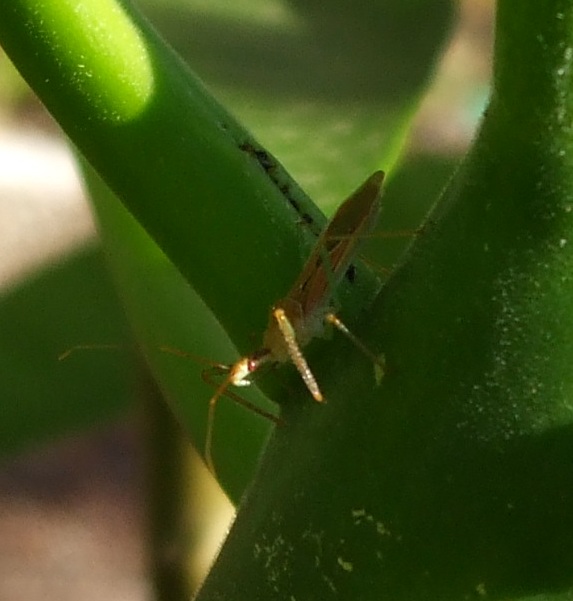 In addition to those above, there are interlopers like this assassin bug.  Image 9-28-11 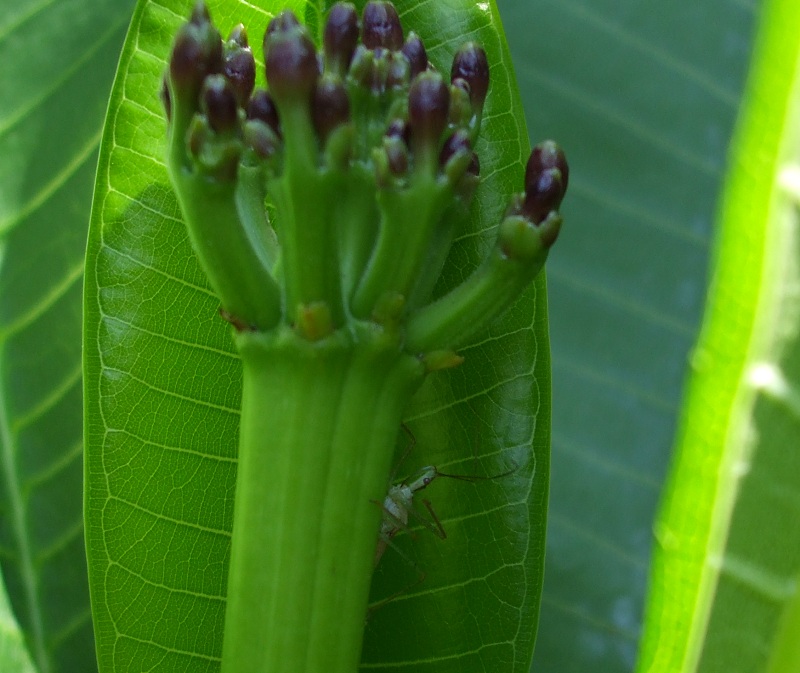 It is so shy that the previous image was amazing to have any of its backside in view.  Note its weapon that it uses to stab prey.  Image 9-29-11

Although assassin bugs probably don't do much for mites, they sure can help keep the plants clean of aphids.