After seeing how the Little Black Ants just adored the sweet nectar provided by the plumerias all summer, and a search the net for information on brix levels for plumeria came up empty, I decided to purchase a brix meter to ascertain what exactly those levels of sweetness were, which they sure were enjoying.  After performing more surveys, it appears that there are varying levels which are found between the blooms and the extrafloral nectaries found at the base of leaf petioles.  In addition, it appears that the plants also change the composition of the drops, although identical under visual inspection they appear identical to those of ten days ago, as fall progresses, so do the concentration of sugars? expressed.  Why the question mark?  Minerals and covalent bonding of elements in the solution can also be picked up by the meter, but since these drops are crystal clear, I'm just not sure.

In these newer samples, one mix between three plants was obtained from extrafloral nectaries and one mix from three plants was obtained from drops exuded from bloom clusters.  The samples and images for this test were taken on 10-21-11.  Although mentioned further herein, the brix levels which the plumerias are now demonstrating, versus those taken ten days ago, are way above those which would be obtained from excellent quality fruit.  Although absolutely clear in nature, those sparkling drops pack a powerful sugar? punch. 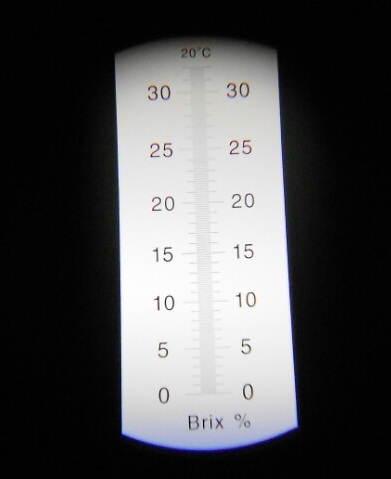 Showing a null reading as a result of a higher concentration of solutes than can be measured by this meter. 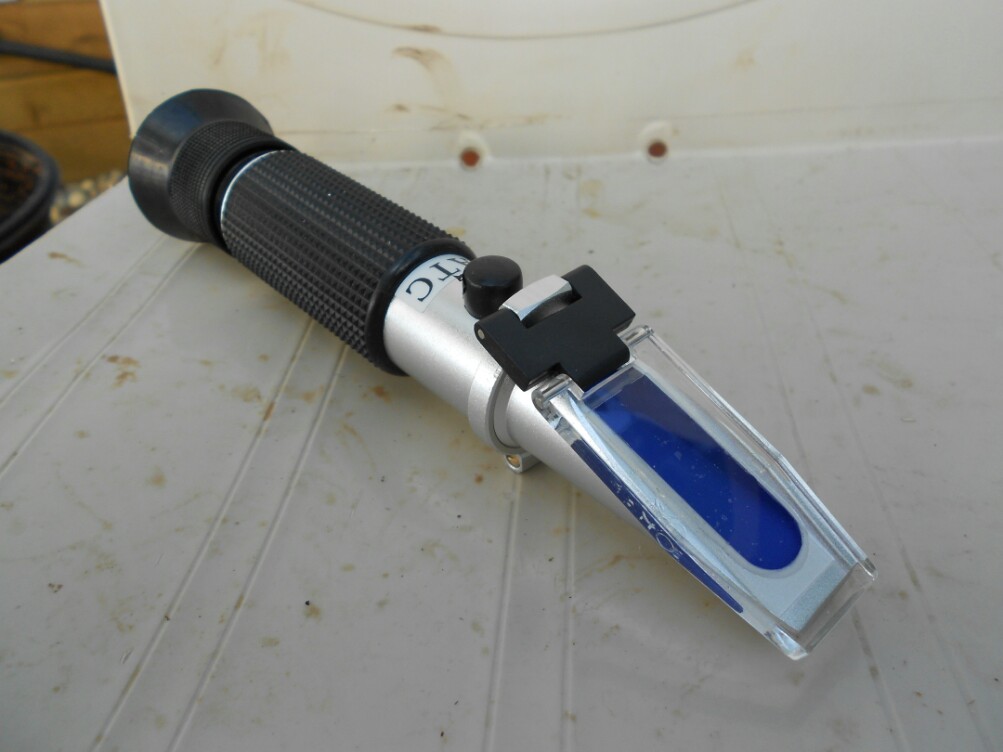 The mix from the blooms. 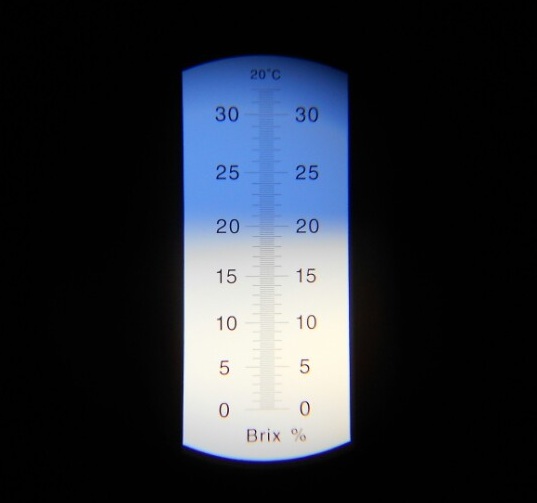 A dilution of more than double, using multiple drops of water.  But tap water was used (dH2O will be used in the future), which more than likely has affected the results. 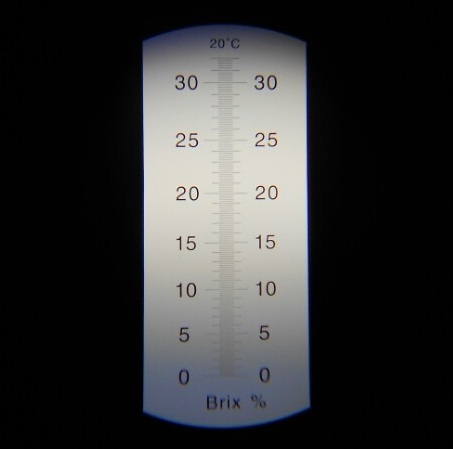 This is from a mix from drops obtained from extrafloral nectaries. 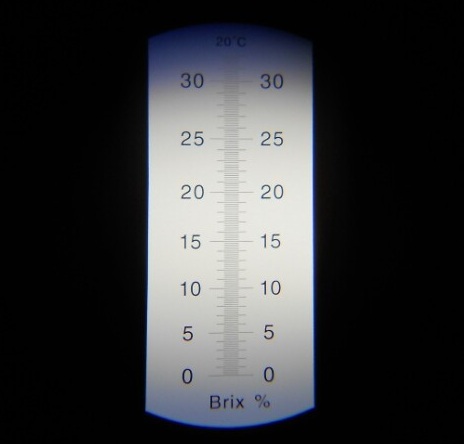 This is a dilution with one drop water added to the mix from the extrafloral nectaries. 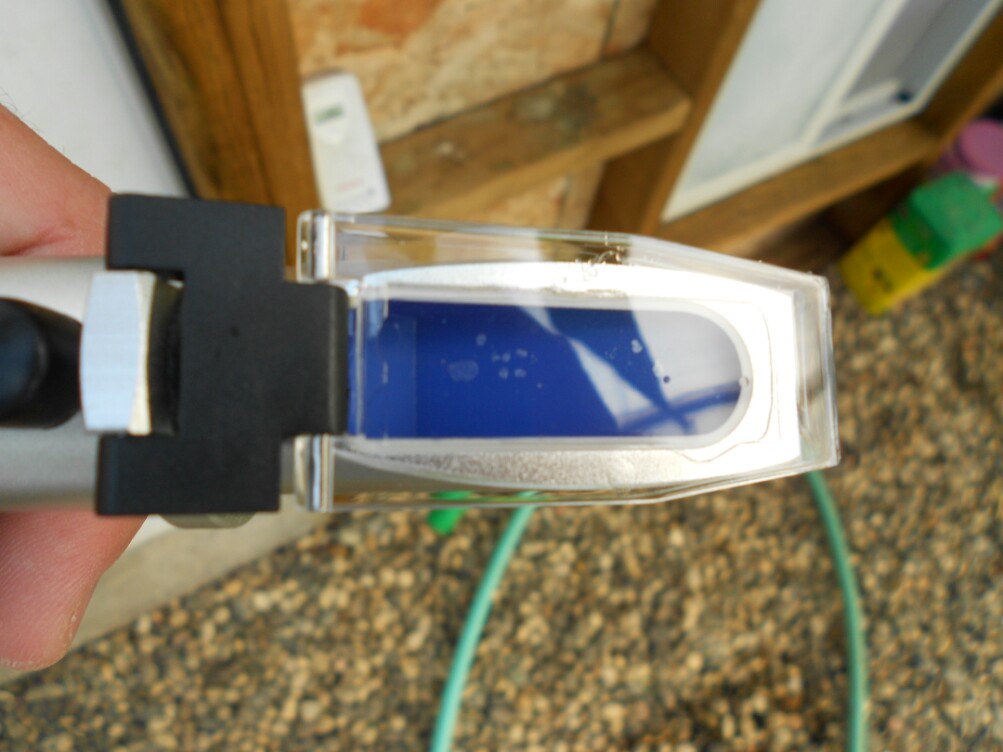 Meter with with one drop of water added. 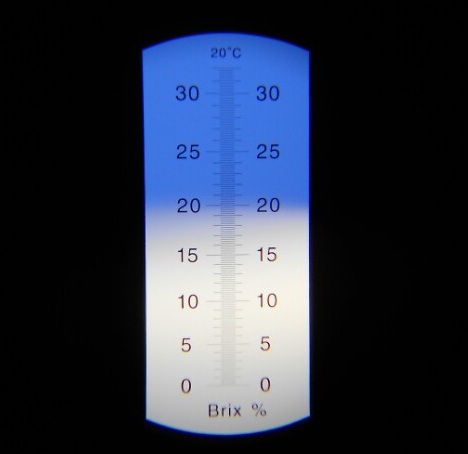 This is a dilution after another drop of water was added. 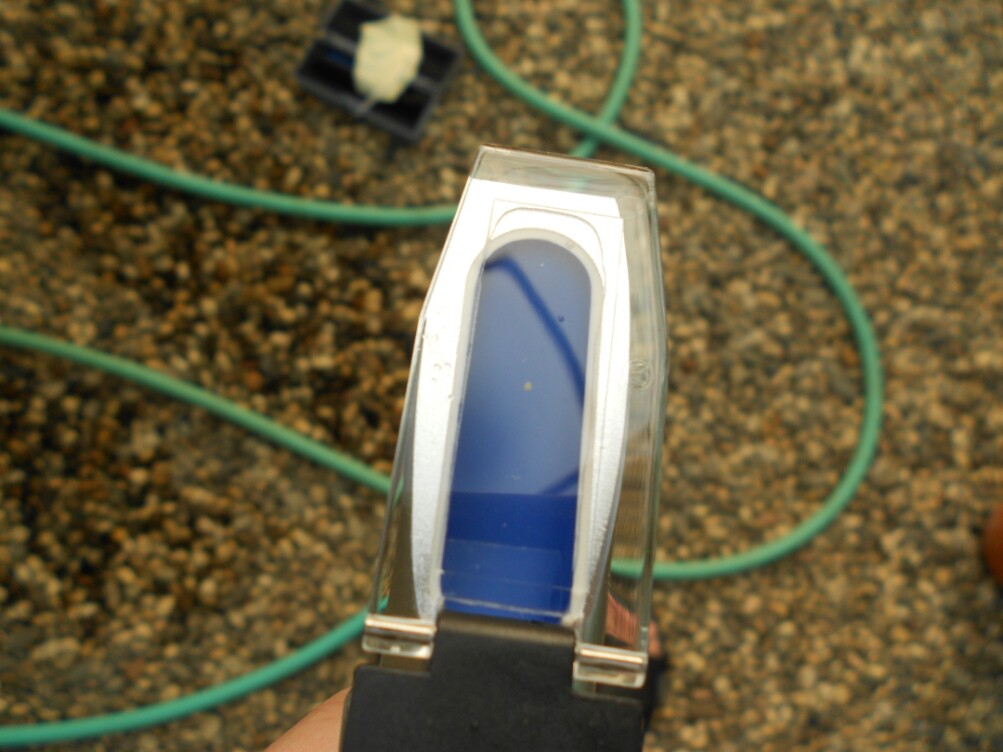 In the below sampling two different samples were obtained.  One was a mix between a drop from a single extrafloral nectary at the base of a leaf petiole and a drop from a forming bloom, while the second sample was a mix from multiple forming blooms.  The leaf petiole sample drop was about twice the size as the drop acquired from the bloom so that may have affected the levels somewhat, I'm not sure.  However, continuing studies of this should provide further insight.  At these levels plumerias are on par with oranges, grapes, and pineapples and, from the chart viewed at this website, those products have to been in the excellent grade range to be on par with the plumeria sugar samples obtained.  Very interesting and sticky too. 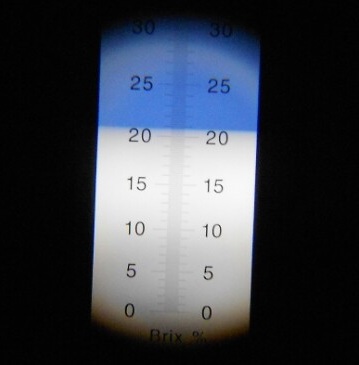 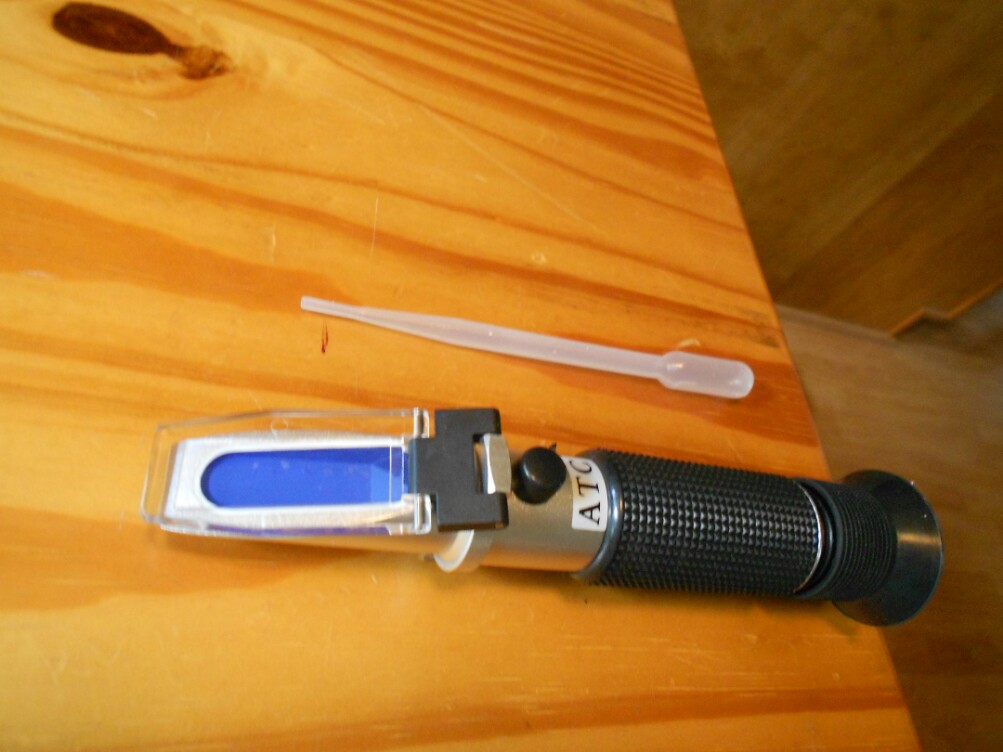 Brix meter and pipette with mix of bloom drops. 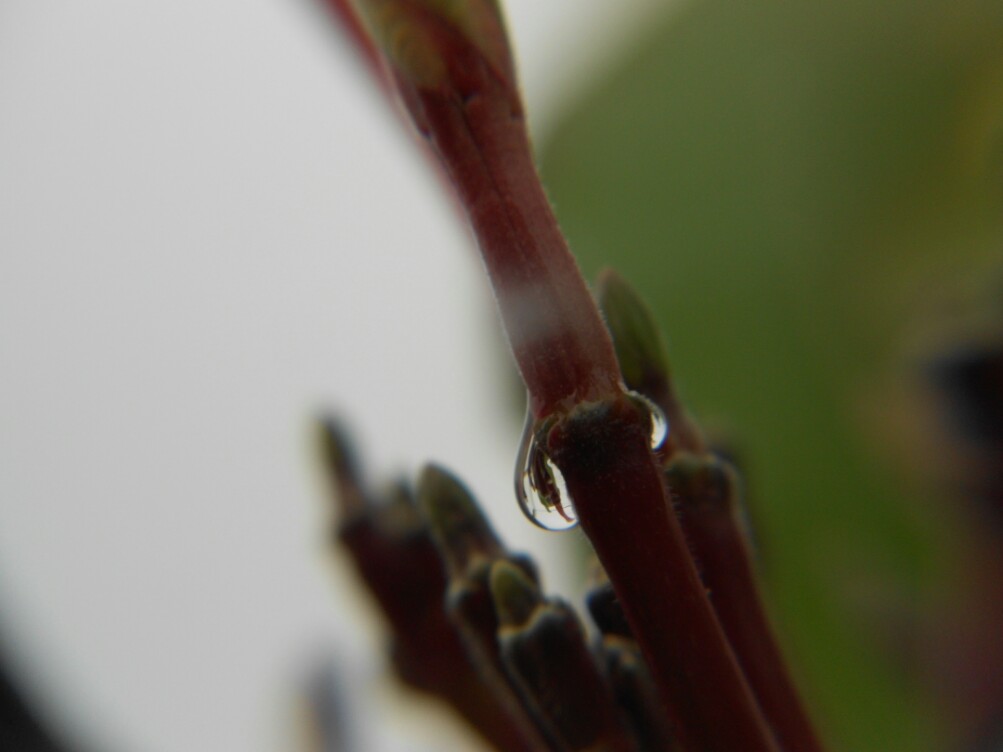 Drops from one of the blooms making up the average. 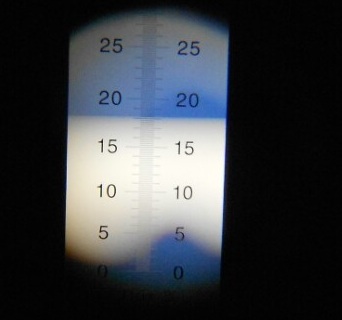 Brix levels from drop from base of petiole of leaf from near forming bloom clusters and one bloom.

The sample was small, which also may have affected the reading.  So I took the second sample, the one above from multiple blooms. 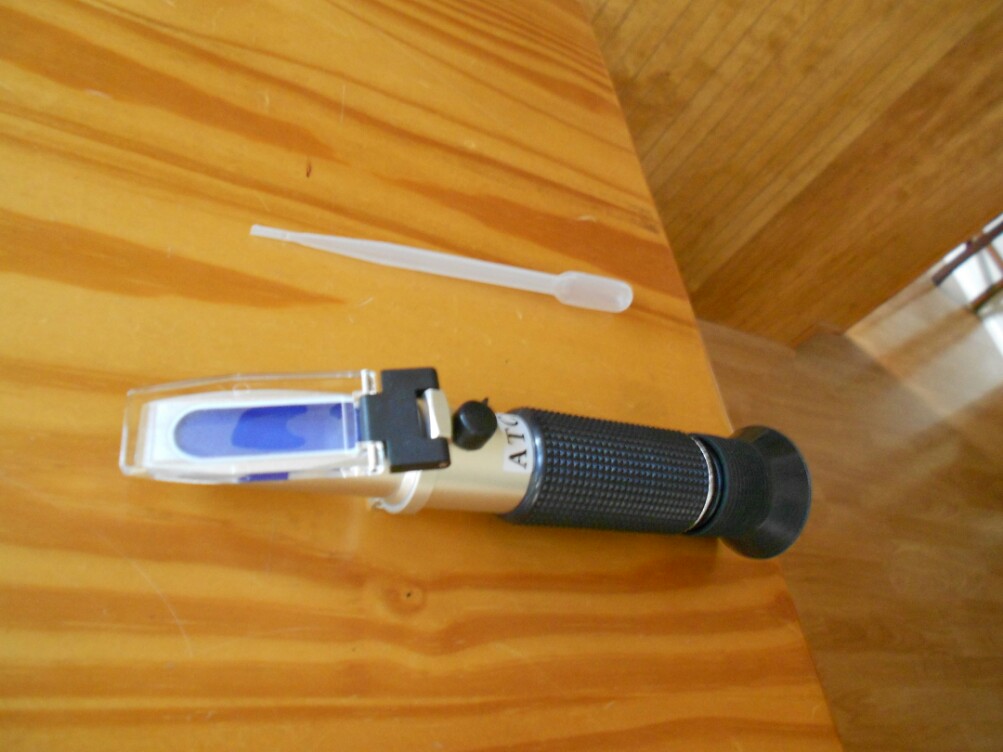 Small sample of mix from leaf petiole and bloom. 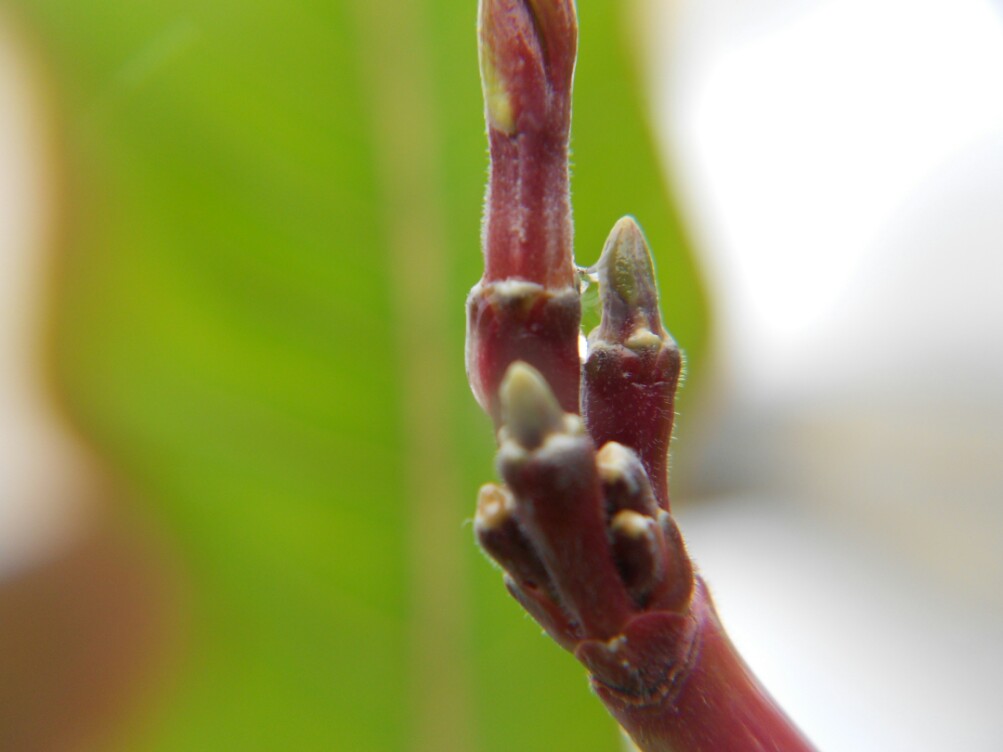 Bloom which donated drop for mix between one bloom and one leaf petiole. 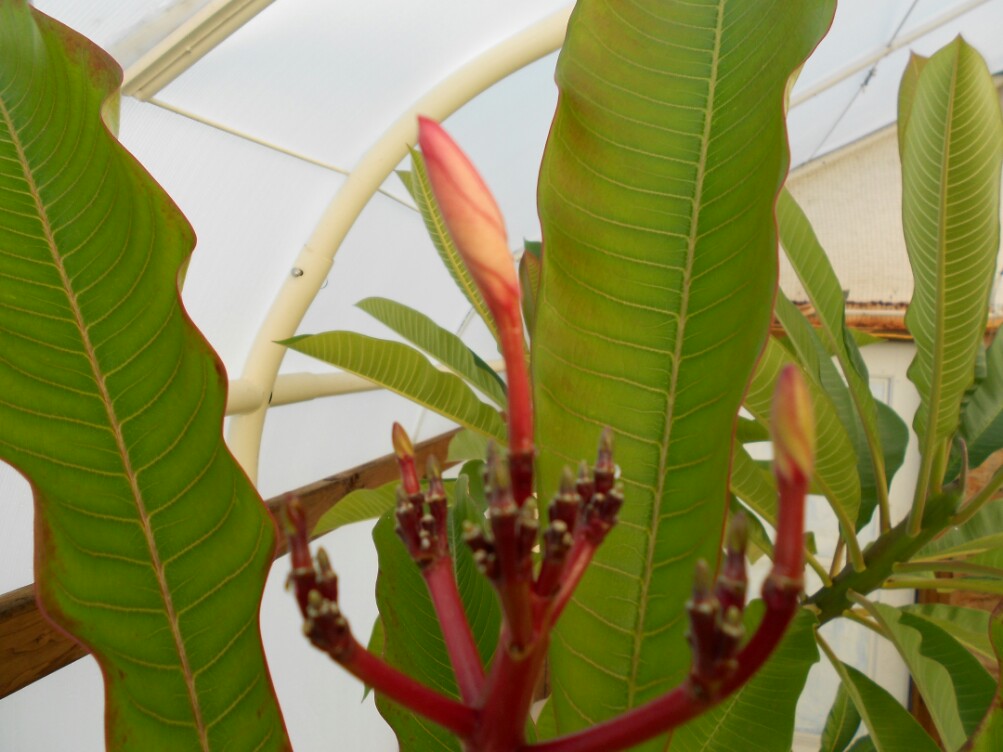 Kauai 1 of 5 clone, first one out of TC.  Should be opening any day now. Image taken before sampling.