This year, 2013, has proven fruitful in regards to stem rot upon the plumerias in the greenhouse.  As of this time Plumeria stenopetala and the common white P. rubra appear to be free of any stem rot.  The red plumerias appear to be most susceptible to the rot and the P. obtusa has moderate damage.  In 2009 I attempted to isolate the pathogen which was causing the rot but with this year's abundant display it has made it easier to narrow down what may be responsible.

Botrytis sp. can cause rot of senescing tissues (Deacon 1997 *referenced at the bottom of page) and has expressed itself from areas on the stem which had petioles attached.  Although Botrytis sp. can be a saprophyte it can also be a pathogen and directly responsible for rot of fleshy tissues, including senescing ones. 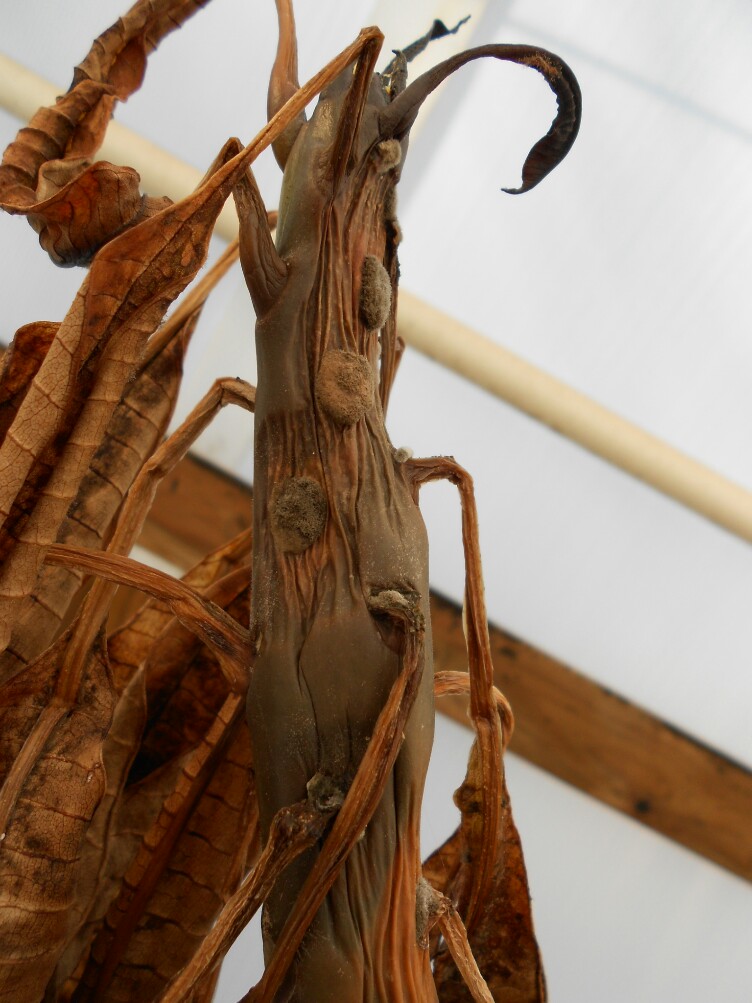 Red shell offspring which has suffered the most damage this season. 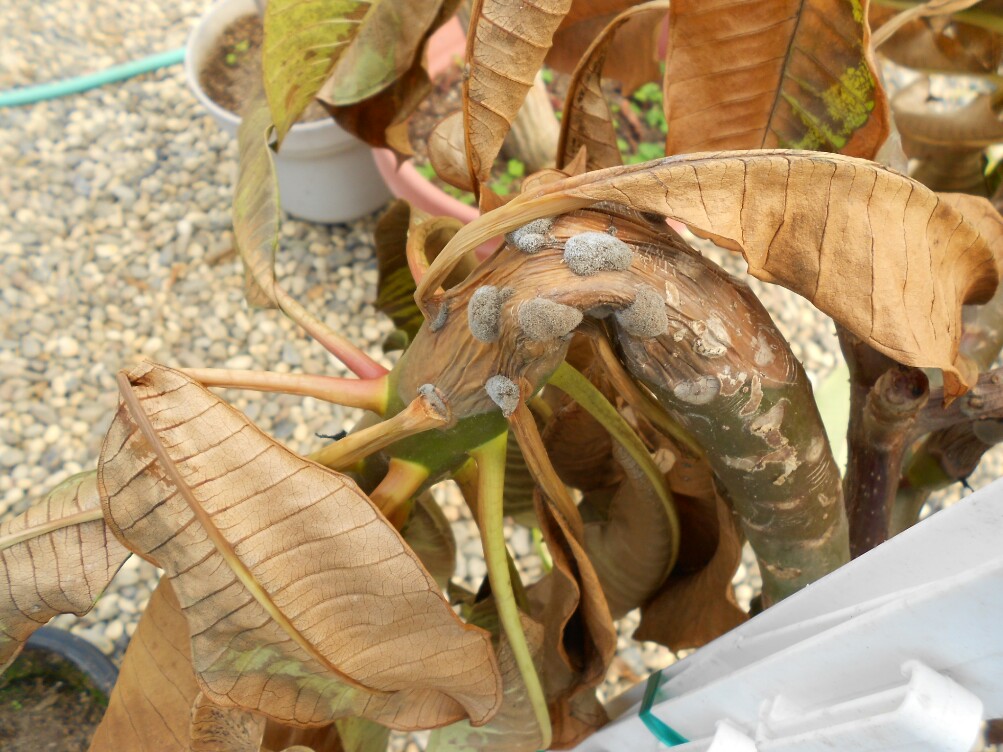 Another red shell offspring showing abundant damage.  The below shows a sample taken from the plant in the image above. 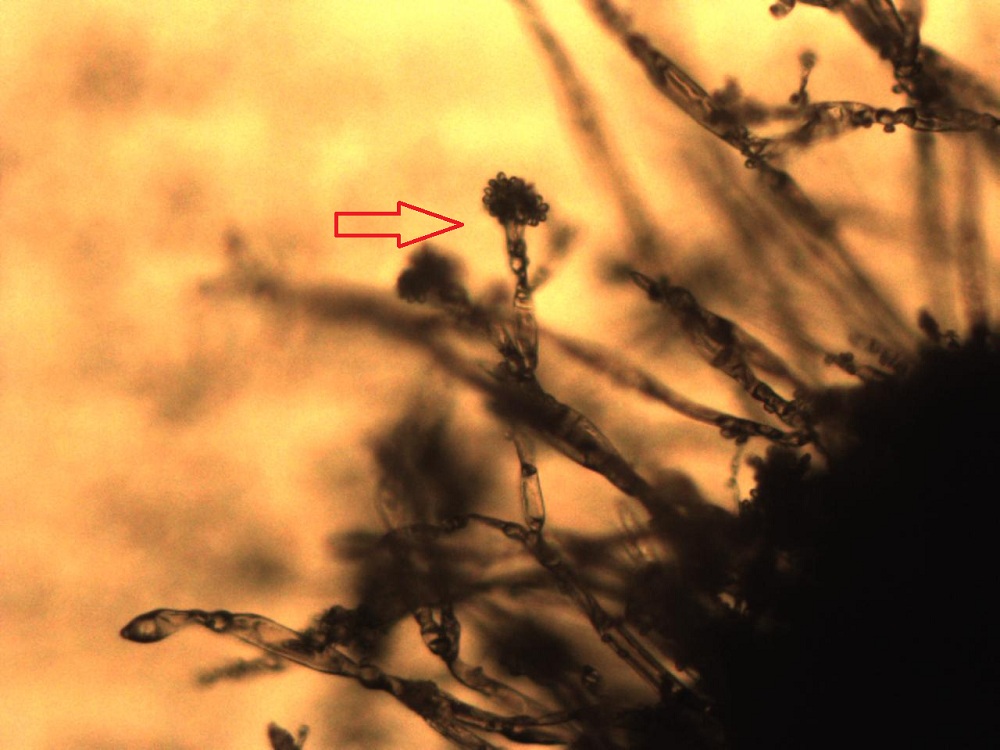 The above image shows a fruiting body with conidiophores which has helped narrow down which fungi it is. 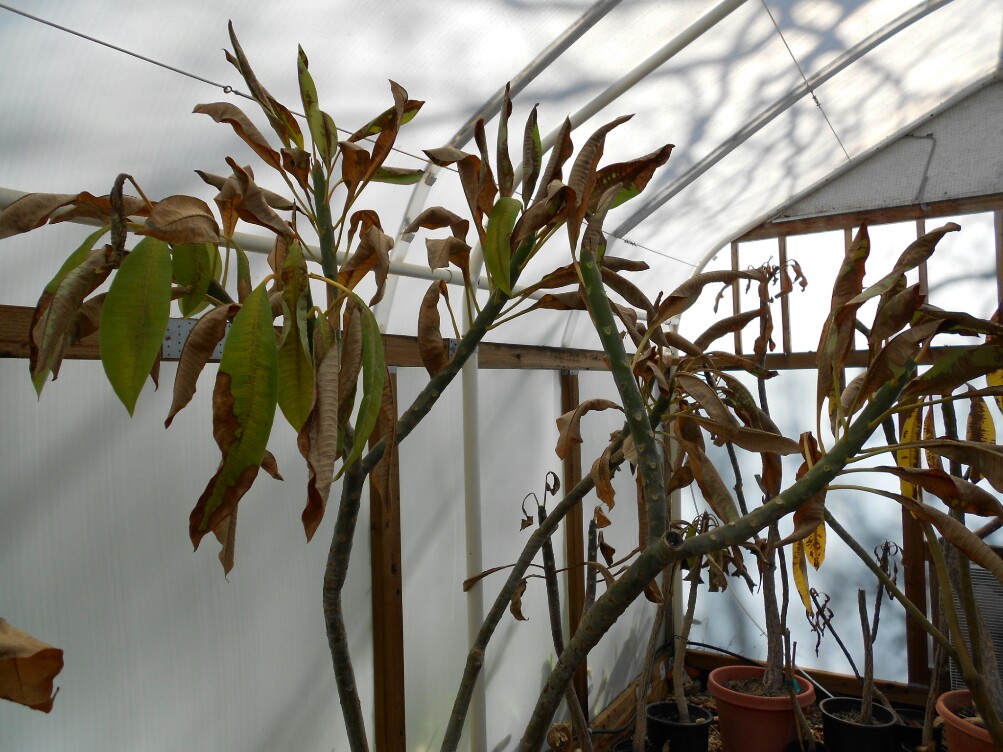 Common yellow which is the source plant for the adult tissue cultured plantlets. 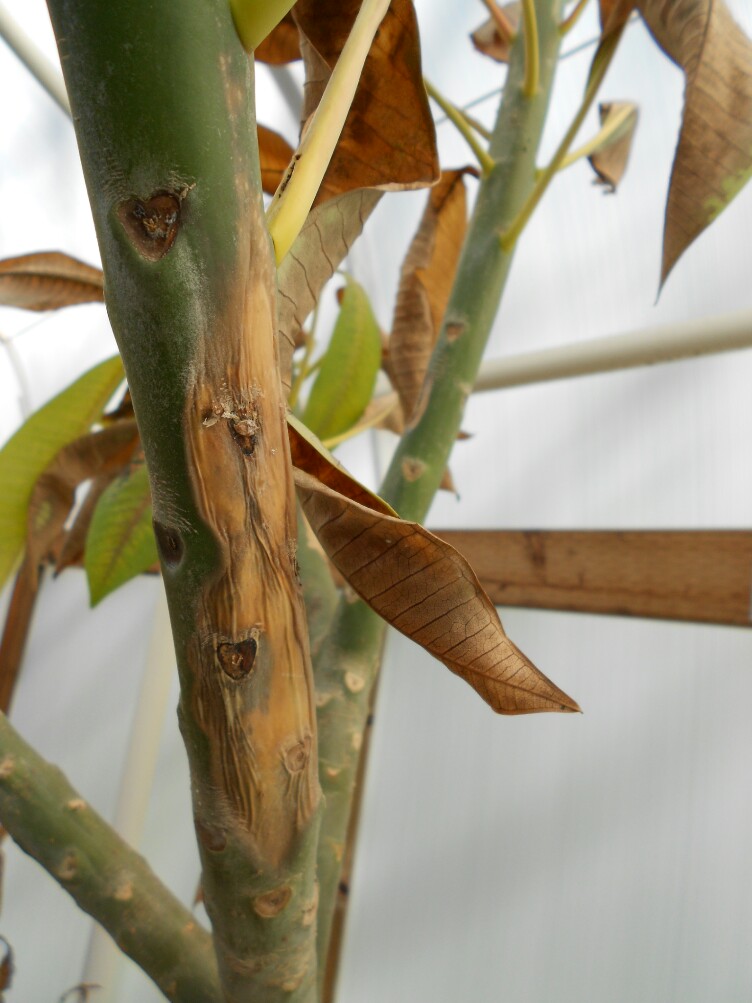 Although it has tissue damage the fungi doesn't express itself as readily as it does upon other plumerias in the greenhouse. 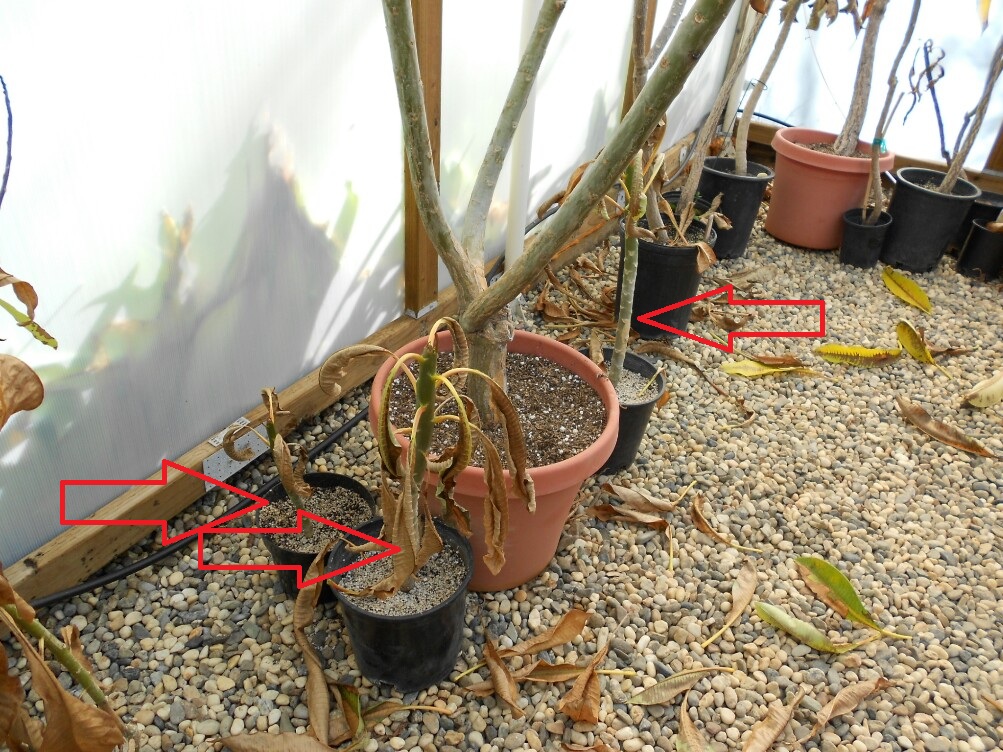 The arrows are pointing to three tissue cultured plants and the below image shows how they have damage similar to the source plant. 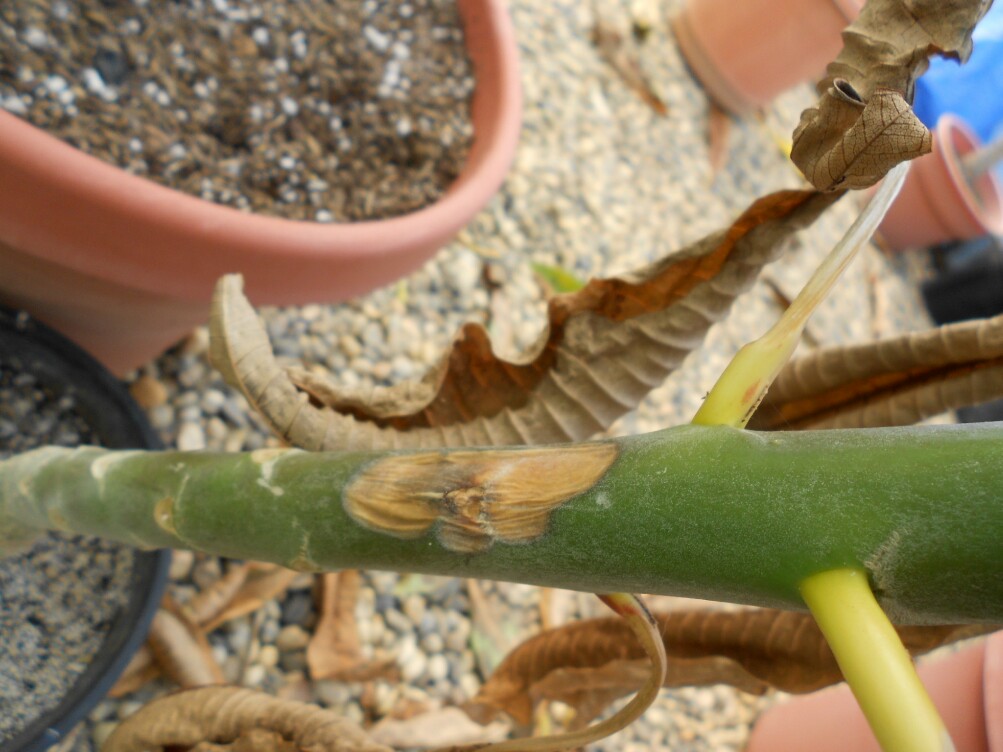 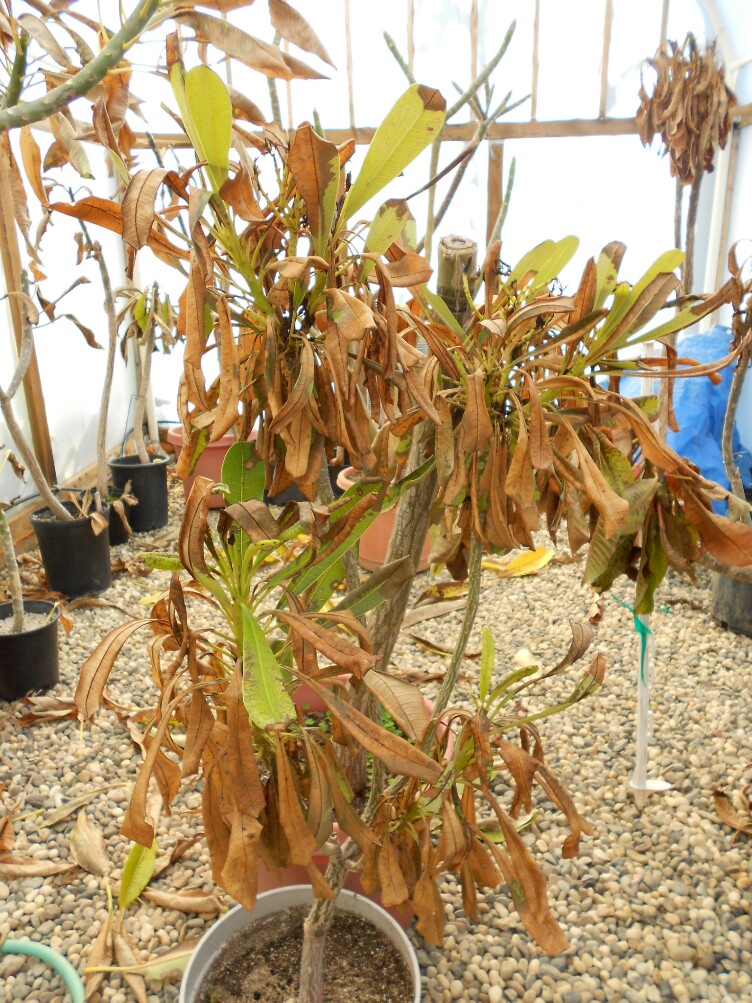 This the P. obtusa, showing dead but still attached leaves. 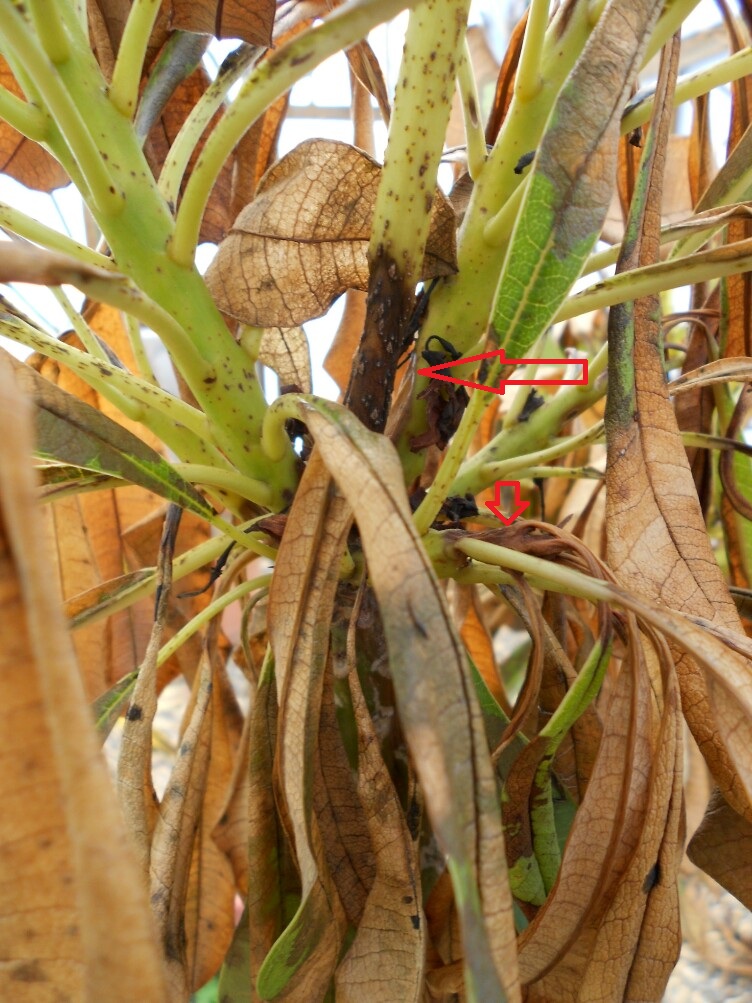 The arrows point to damaged areas and as demonstrated by the common yellow P. rubra, the fungi isn't expressing itself as readily as other plumerias in the greenhouse have.

Vascular system stem rot has been noted upon the plumerias in the greenhouse since 2009.  It occurs within the conditions presented by the greenhouse and temperatures which can drop briefly to 38 degrees Fareinheight.  Images taken in 2009 show the condition but as mites may have been present upon the plants during that over-wintering period, they have not been included.  Neither 2010 nor 2011 over-wintering demonstrated mite infestation, except for the Plumeria x stenopetala plants which had been outdoors after getting infected indoors while next to an open screened window, adjacent to gardenia, azelea, and camelia bushes.  From which of the plants the mites came, not certain but there are also roses real close by too, so any one (or more) of four different hosts could be responsible.  Treatment took care of them but required retreatment, as has been demonstrated in the past with P. rubra and mite infestation.

The below represents a sample of damage from other years, starting with the samples taken for microbial isolation and culture.  From those tissue samples sprang forth a number of different organisms, one of which may or may not be responsible for the vascular rot condition which has been noted. 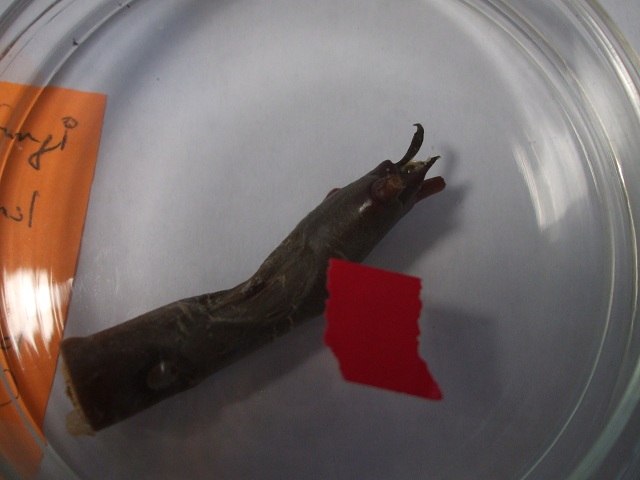 Note the shriveled, area.  The pathogen enters via still attached petioles from leaves which just haven't yet given up for the year.  Low temperatures of the greenhouse though soon cause the leaves to abscise although some stay with attached via rotted petioles, some of which are evident in the above image. 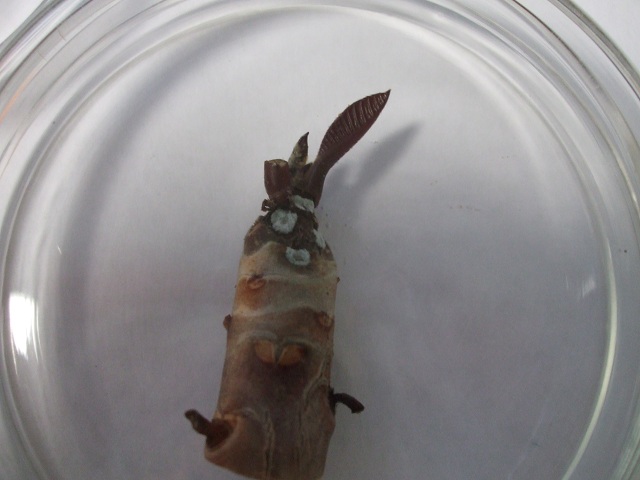 The gray-green fungi had my curiosity although it is probably a secondary infection, one following the other. 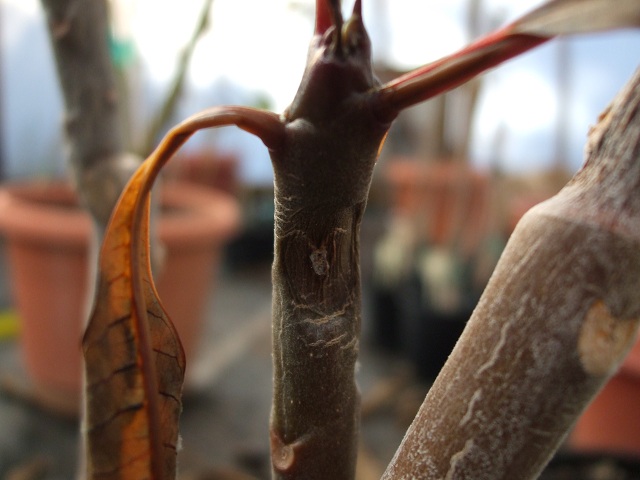 Another example of how a previous leaf scar shows initial infection 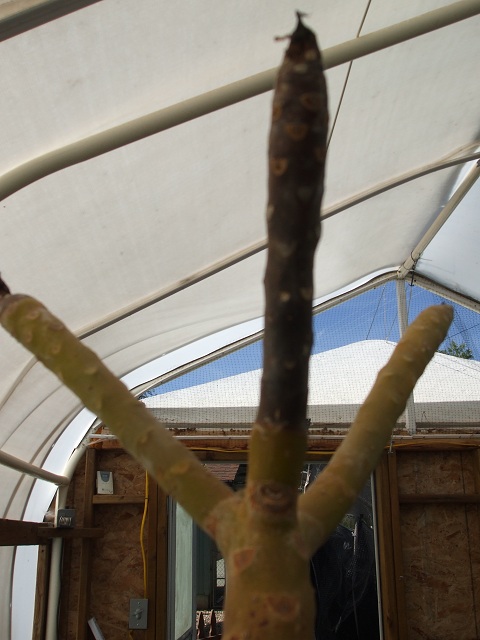 This is an example of a previous infection allowed to run it course.  Although not obvious in this photo, two of the three stems of this plant get the infection which is stopped at strategic points. 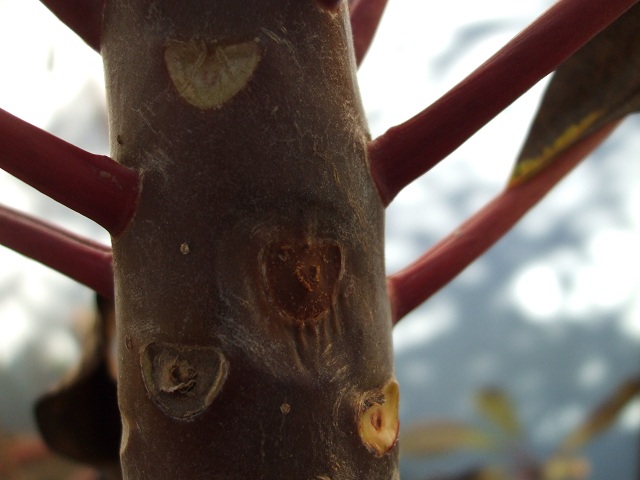 This is the first in a series of images of the infection upon this stem.  January, 2011. 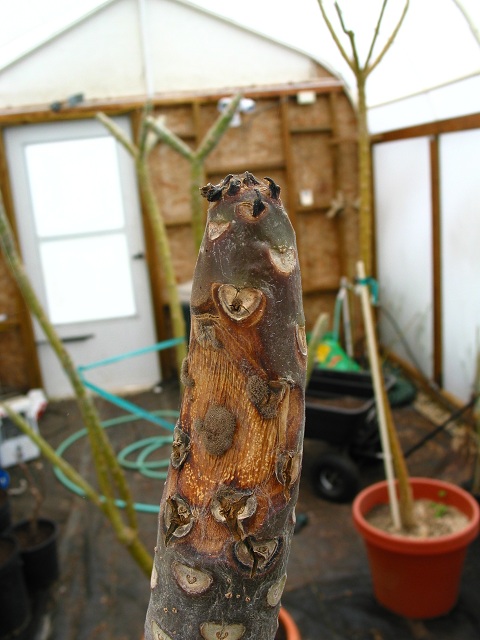 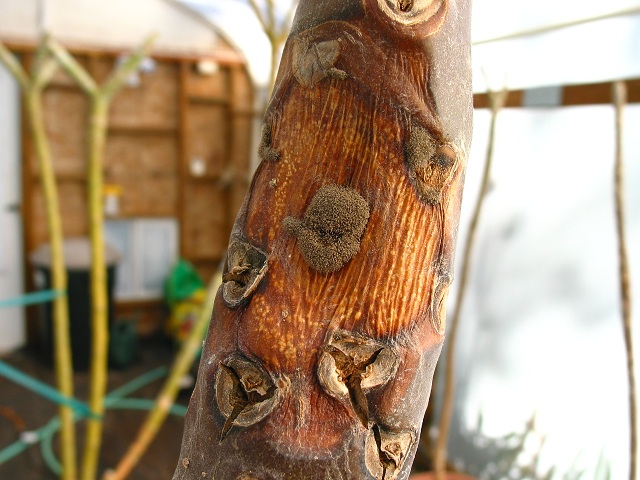 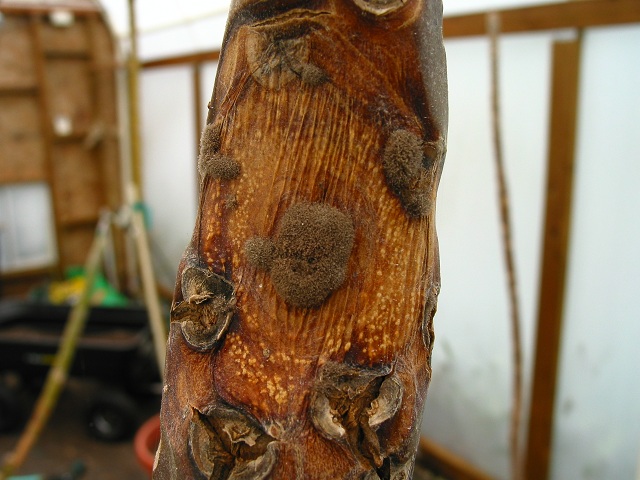 April.  The gray spongy stuff is also more than likely a secondary and decay organism. 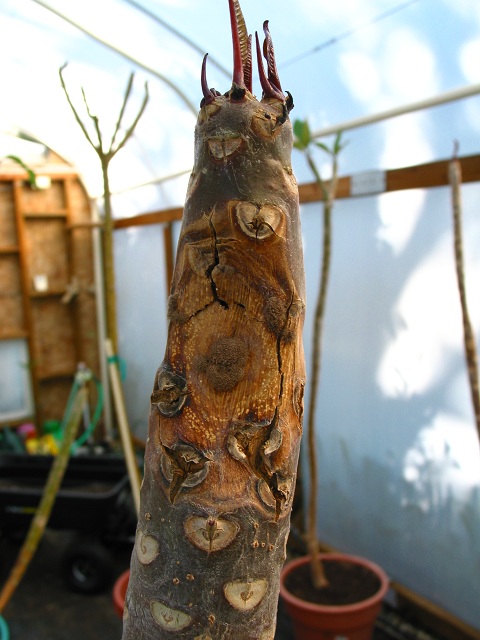 As the tip shows the plant is pushing past the damage.  This is a red shell offspring which is almost a decade old now.  Others aren't as fortunate and lose entire stem lengths. 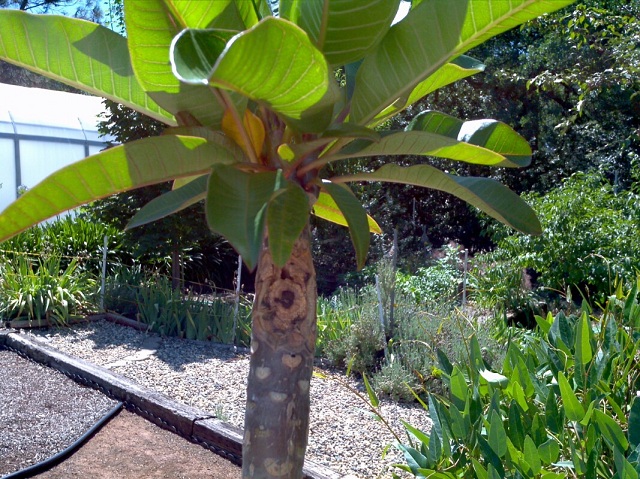 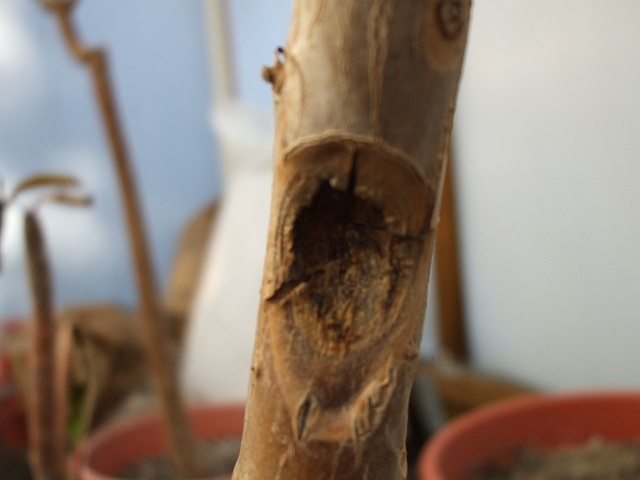 Another example of a plant growing beyond the infection which occurred in 2010. 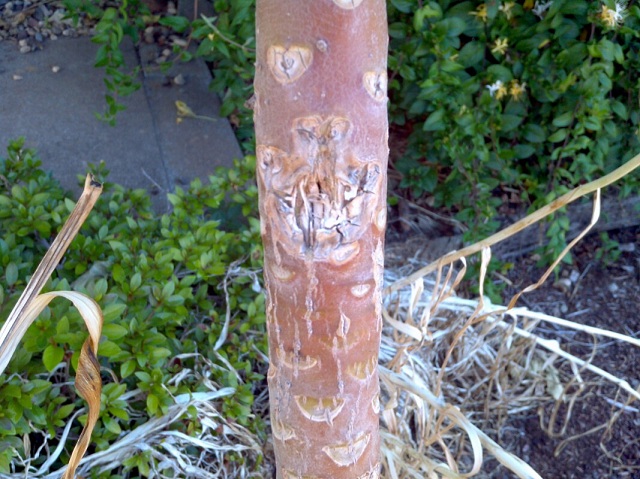 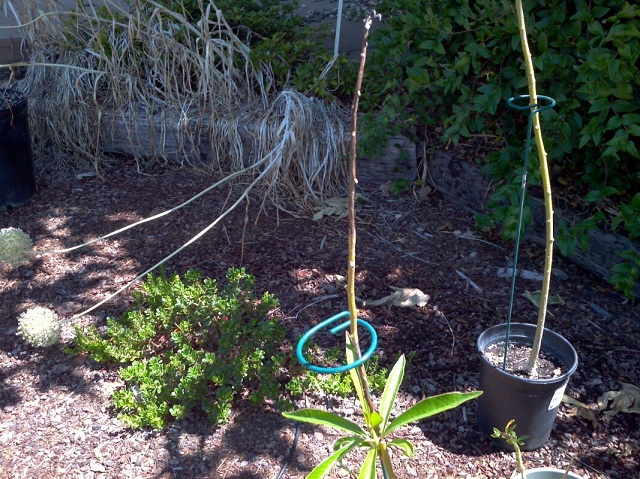 This is of two P. x stenopetalas which have partially succumbed, showing as well the ability to stop the infection further down the stem.  The green stem in the right hand side has a healthy plant, with a tip which didn't present any problems.  Some did, some didn't.  Should be similar genetic tissue, as they are clones from the tissue culture of two embryos from same pod which led to propagation lines.  This may be a demonstration in the slight variation in genetic material between embryos. 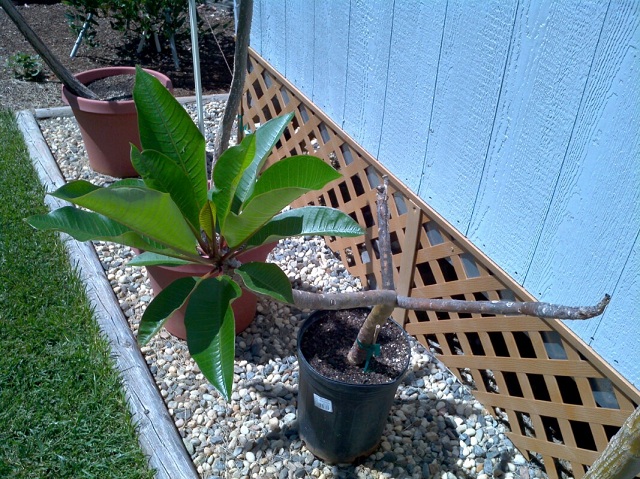 This is the same three stem individual from further up in the page, again in July, 2011.  Both the rotted stems have died back to the branching point.  Whatever it is hasn't gone any further into the vascular system from those points as the plant is otherwise healthy. 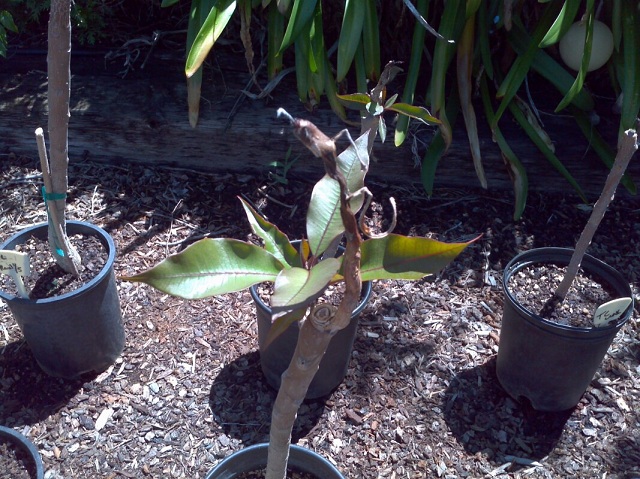 More examples of infection and how they respond.  All of these are from tissue culture, P. rubra seed, in addition to two adult tissue (tip culture) culture plants which came from weak red shell stock. 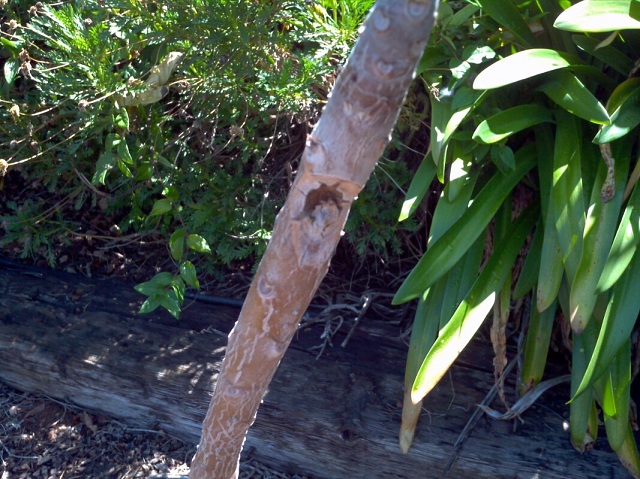 This is one of the Kauai 1/5 plants.  Unlike its more mature and earlier rooted and ex vitro sibling, this one shows some damage.  The tip is just starting to awake so the damage has slowed it down somewhat. 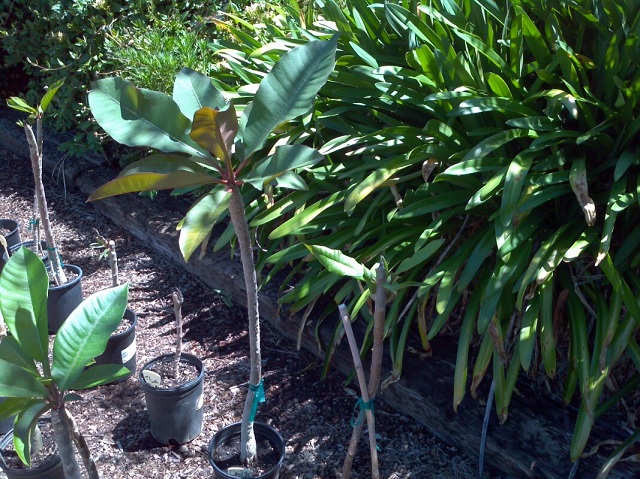 This shows the variation as to both susceptibility and being "awake and happy".  The others which got "nubbed" are struggling.  Those which aren't are needing to be potted up.

As the damage has happened and whatever I could collect has occurred, plus whatever cultures which could be obtained of the organisms which might or might not be responsible have been gathered, then 2012 year may be more insightful, at least I hope.