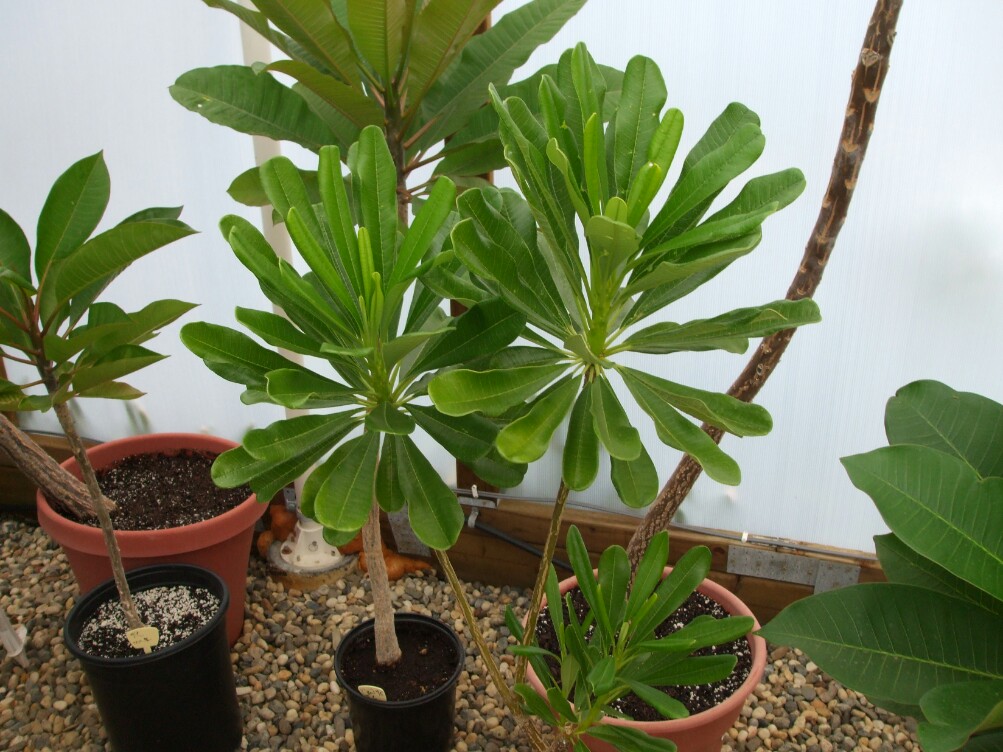 This was given to me by Luc in Florida and later in the year will be moved inside my house where it resides every winter.  As with the other plumerias, it too has been subjected to the levels of fertilizer and water that the other plumerias experienced.  This year too it has responded well.  By comparing how the plants behaved with minimal fertilizer and just enough water to keep them hydrated versus a full dose of fertilizer on a regular schedule and flooding the heck out of them during the growing season, a great deal of insight has been obtained, some of which I hope to later share.  Now that they are back in the greenhouse I doubt they will be needing as much water and definitely as it becomes December, they'll need very little at all.  But, for the time being (October 4, 2011), they should keep responding and growing quickly.  However, although the Little Black Ants were transported in with the plants, it doesn't appear that they have stayed with them, only less than a day later.  I removed the weed fabric from the greenhouse floor so they would have a more direct route to the ground.  Hopefully they'll be back or I'll be spraying soap again.

In regards to tissue culture of P. obtusa, one previous attempt was made at sterilizing tissue from this plant, using a tip as explant tissue, but the tightly whorled nature of it really hindered those efforts and it didn't come out clean.  This time, knock on wood, 3 out of 4 vessels are sterile, with the fourth having a fungal contaminate.  Images from clonal stock will be posted as things progress. UPDATE - Only one of the vessels had any growth, unfortunately it was also the one with the fungal contaminate.  No further attempts have been made as of August of 2012 and because the plant grows rather slowly, when additional attempts will be made is uncertain, as attempts to induce growth of multiple shoots during the winter while indoors have been unsuccessful.